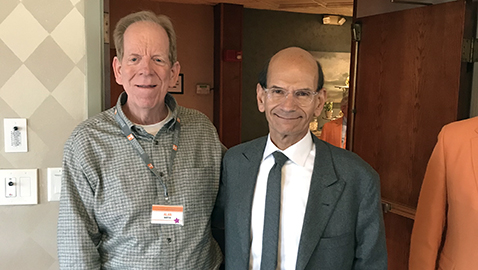 For more than a decade, Alan “Red” Barton has been a fixture around both the Bearden High School boys and girls soccer teams.

He doesn’t coach but he can do just about everything else as he’s part of the Press Box Crew at the home of the Bearden Soccer Dogs, Turner-Allender Field.

Some members of that clan include Dr. David Harris (the longtime public address announcer for Bearden Bulldogs and Lady Bulldogs soccer), Barton, who handles most media relations requests and serves as backup PA man and statistician, Jerry Gianeselli, who runs the scoreboard and game clock, Jeff Riemer and Fritz Thumler.

All have had sons or daughters don the maroon and gray on the soccer pitch. Most, if not all of their kids have graduated, but the men have all stuck around and are now staples in the program. Barton’s son, Jed, also went to Bearden High School.

Barton, a University of Tennessee graduate, has always been a sports fan. He loves the Volunteers and an avid supporter of the Baltimore Orioles.

“The only professional team that I really follow is the Baltimore Orioles and I do it for some unknown reason,” said Barton, who made a trip to Florida for spring training before Major League Baseball suspended the 2020 season due to the Coronavirus pandemic. “I’m a big Vols fan.”

Barton first came into the school’s soccer program when his daughter, Amanda, began playing for the Lady Bulldogs.

“I’ve been with the program since 2005 and I was a freshman parent,” said Barton, who began working in his current capacity since 2006.

The one-time field crew worked to build Turner-Allender Field, which is revered as one of the nicest soccer facilities in East Tennessee and Barton jokingly calls himself the boss.

“In the press box, I supervise,” Barton said.

But he knows that there’s only one boss when it comes to the Bearden Soccer support staff and that’s Rick Radcliffe, who maintains the field.

“Rick’s really the boss,” Barton said. “He takes care of the field.”

The Radcliffes are the first family of Bearden High School Soccer. Linda, or Mama Rad, was a longtime assistant coach to former head man Eric Turner. Derick (Rick and Linda’s older son, was an all-state player for the Bulldogs) and Ryan is the current head coach. He’s guided the boys team to Class AAA State Championships in 2016 and 2019. He also won a state title as a player.

The school’s soccer complex is jointly named for Jim Kelly (who remains a regular at home soccer games) and the Radcliffes.

Upon lending his talents to the program, Barton began doing stats and writing postgame summaries that were picked up by the area’s media outlets.

“When I first started doing this, Eric and Rick liked it and our parents loved it,” Barton said. “Eric and Ryan have always let me write what I want to write and neither has ever influenced me.

“But it’s always been positive news.”

Barton is retired from First Tennessee (now, First Horizon) Bank where he worked for more than 20 years but he’s always loved sports.

“I just always loved to hang around the ball fields,” said Barton, who now works part-time at Willow Creek Golf Course. “I went to the old Bearden High School and every time there was a game, my mom would let me go. I could always walk there by myself.”

In college, Barton wrote for the Westside Story, which later became the Bearden News-Enterprise and is now the Farragut Press.

“They needed a sportswriter and I covered Cedar Bluff Junior High School basketball, some UT swimming and then I wrote one column of my own,” Barton said.

“The officials always love coming to Bearden and we’ve professionalized our press box,” Barton said. “We strive to make game day a professional experience for the fans and the sportswriters.”