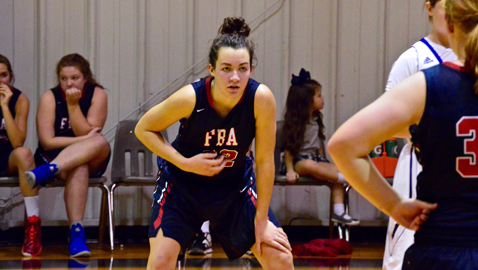 Don’t be surprised if Savanah Pope ends up being a high school basketball coach someday.

The Karns High graduate already has shown she can play the game, be a leader and coach youngsters in AAU summer ball.

“I plan to attend Pellissippi State Community College for the next two years in the major of Nursing,” said Pope last week via e-mail. “Following the two years, it is all up to God’s plan. Tennessee Wesleyan and Lincoln Memorial University are in the back of my mind; however, I trust that I will be led by my faith for the best path of my future.”

Karns’ female Student-Athlete of the Year for 2015-16 hasn’t closed the book on basketball.

“Currently, I am playing with an AAU team, Tennessee Threat, to hopefully gain some exposure for possible basketball opportunities,” she continued. “However, I will be thankful for whatever opportunities are thrown my way on whether I will get to play in the future or not.

“I am very thankful to have had my high school and summer basketball coaches that have encouraged me to this point in affording the opportunities of coaching and leadership roles in life. Basketball has been nothing but a blessing in my life and I would love to share the memories I have made with teammates, life skills from coaches, and most importantly – the love of the game – with others one day.”

Tobi Kilgore, Karns’ athletic director, said Savanah was a standout player for the Lady Beavers. She was voted team MVP, made the All-District 3-AAA team and was a four-year captain. Pope got some experience in coaching this summer with the Tennessee Threat’s 7th and 3rd grade girls teams.

On the academic side, Pope’s grade point average was over 4.0. Throughout high school she was a peer tutor and involved with Beaver Games (Special Olympics) for CDC-A.

Savanah, who also won the Johnny Mauer Award, was a member of the Student Government Association, Health Occupations Students of America, Fellowship of Christian Athletes and National Honor Society.

“Savanah was an excellent student-athlete while at KHS,” added Kilgore. “She was not only an outstanding athlete, but excelled in academics as well. She was also a leader within the school community and participated/led several events giving back to the whole community of Karns.”

Martin became FBA’s first-ever qualifier for the TSSAA Division II state track and field meet this past season and placed 11th in the state pentathlon, after finishing second in the East Sectional pentathlon.

For these performances and more, Martin and Lett also have been named First Baptist Academy’s Student-Athletes of the Year.

In basketball she averaged 10 points per game and ended the season with 204 points, playing in 21 of the team’s 22 games. Martin also finished fifth in the 300-meter hurdles at the KIL Track Championships.

Lett averaged 18 points per game in basketball and ended the season with 329 points, playing in 18 of the team’s 21 games. He also played junior varsity soccer.