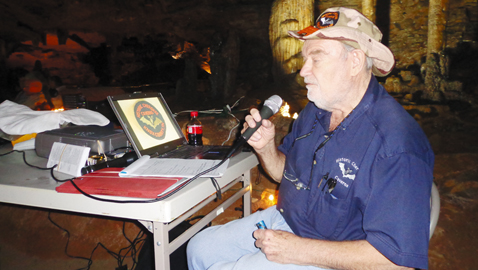 There were more people than there were chairs Tuesday when two experts talked about “Bats and Bones” in Cherokee Caverns on Oak Ridge Highway.  Cave manager and noted spelunker Jim Whidby was joined by forensic anthropologist Dr. Bill Bass.

Before the presentation the temperature outside was muggy and in the 80s, but inside the historic cavern it was about 58 degrees. Several people brought their own folding picnic chairs into the cave. The audience was made up of family members of all ages.

Whidby, owner of Byron Printing of Louisville, Tennessee, welcomed the audience to the cave and gave a brief history of the caverns. He followed with a video about the various types of bats, three of which he has reintroduced to the cave after years of neglect at that location.

Holding an event inside a cave may seem unusual but Whidby says the cavern hosts several each year including movies and a Halloween and Christmas celebration. Whidby’s son, Mike, called the events there “really good and safe.”

Dr. Bass spoke of his experiences in identifying bodies and determining the causes of death. His “Body Farm” near the UT Hospital has become world famous for the study of how corpses decay. Bass and John Jefferson teamed up years ago to produce a series of books about Bass and his profession that have been best sellers.

Before the event Dr. Bass was outside signing books and posters and a long line developed waiting for his attention. When the audience was seated and Bass entered the cave a wild applause erupted and echoed off the walls.

”It’s not every day you come to a cave and get a lecture,” Bass said, then he said he was going to share with the audience what not to do in faking your own death.

One of the cases Dr. Bass shared with the audience was of an American’s fake death while in Mexico. When asked to investigate the death by an insurance company Bass went to Mexico and examined the burned out car, finding enough bones to declare that the skeleton did not belong to the suspect.

Asked how the event became an annual occasion  Jim Whidby said that after the first “Bats and Bones” presentation he was driving Dr. Bass out of the cave in the electric cart three years ago and on the way Bass said he’s given talks in lots of places but never in a cave. Whidby thanks his daughter-in-law for the idea of the two experts getting together.

“He seemed so thrilled with it before you know it we were setting up another event,” Whidby said.

Whidby talked a bit about the history of the cave and told The Focus that one of the films he plans to offer in an upcoming event is the documentary on the death of Floyd Collins who died in a Kentucky Cave in 1925 after being trapped beneath a fallen rock. He said the film includes original photographs and news stories. The death of Collins was world-wide news.