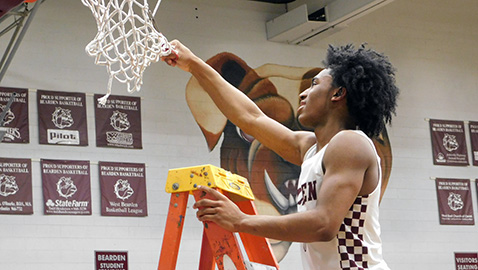 The third time’s the charm. Fans of Bearden High’s basketball team hope that old idiom holds true as the Bulldogs make their third straight trip to the TSSAA state tournament this week.

But in two of Bearden’s last three games on the tournament trail, close battles have caused some alarm, rather than reflect a lucky charm.

Maryville dug its way out of a deep hole to tie Bearden in the fourth period before finally falling in the Region 2-AAA semifinals at Oak Ridge. Then in a nerve-racking 46-40 sectional victory last week at Bearden, Kingsport Dobyns-Bennett’s patient and deliberate strategy gave the Indians the lead with 25 seconds left in the third period.

Bearden fans squirmed when Shamarcus Brown missed both of his free throws, leaving D-B up by one at the end of the period. A 3-point shot by 6-7 junior Charlie Browder restored the visitors’ margin to one midway through the final period.

But Bearden’s pressure defense would soon destroy the Indians’ upset bid as the Bulldogs (29-5) notched their 17th win in a row. And after the game, Coach Jeremy Parrott put out a reminder.

“Our schedule has been tough,” he said. “We haven’t been in too many predicaments that we haven’t already seen.”

After Browder’s bomb set off the proverbial alarm, Bearden responded with a game-deciding seven-point flurry, capped by a 3-point shot from the corner by Ques Glover and then a steal and layup by the talented point guard that gave the Bulldogs a six-point lead with 3:14 remaining.

Marae Foreman, Dobyns-Bennett’s diminutive guard, managed to score a layup over 6-10 Drew Pember to reduce the deficit to four at 2:20, but Bearden then turned in perhaps the best play down the stretch when Glover found Pember open underneath and fired a pass to the UT signee for a slam dunk with 1:40 to go.

Foreman followed with a jumper, but the Indians could get no closer than four points as Bearden hit eight of eight clutch free throws the rest of the way – the first two by Roman Robinson and the last six by Glover.

“We wanted to compete and give ourselves a chance,” said D-B Coach Chris Poore, who saw his team lose 70-44 at Bearden in last year’s sectional game.

Parrott, in his third season as head coach at Bearden, acknowledged the win didn’t come easily.

“These don’t ever,” said Parrott. “I coached a basketball team in 2012 at Cherokee High School that came down here and stole one at West, a team that had been in the state tournament the year before. So I know all about those. I know about those all too well. We took it all seriously.

“The flow of the game wasn’t our pace. Our point guard was in a little foul trouble, so I delayed the press a little bit and finally started speeding the tempo up because I didn’t want him to leave us too soon. I didn’t want him to pick up a cheapie and then that would limit us on what we could do late.

“The fact that we were able to delay it and it finally worked was not a surprise to me. They’ve been doing this for three years now.”

“All of those things seemed to bother their rhythm a little bit,” added Parrott. “Just changing the tempo. Just making them see something they hadn’t seen tonight. And in this environment, it did what I thought it would do. It told on them.”

Glover finished with 19 points in the low-scoring contest and Trent Stephney 10. Pember and Robinson added six each and Brown chipped in five.

Browder and Foreman each scored 16 for Dobyns-Bennett (30-5).

STATE OPENER: Bearden will play Franklin (28-6) Wednesday at 6 (CDT) in the quarterfinals. If the Bulldogs win, they will go against the winner of Sevier County versus Whitehaven in the semifinals Friday at 1:15

Defending state champion Memphis East (24-8), which defeated Bearden 72-60 in the semifinals last season, is on the opposite side of the bracket.

The Class AAA title game will be Saturday at 3:30.