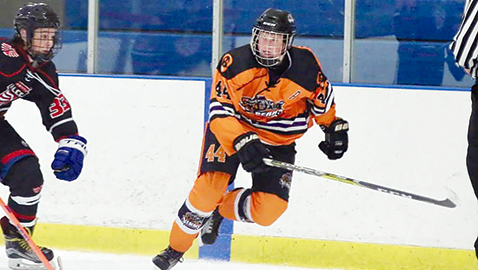 Ben Baumgardner has always dreamed of playing professional ice hockey. He may now get the chance to lace up his skates and play in NHL arenas.

He came one step closer to realizing his lifelong dream recently when he signed a contract to play for the Essa Stallions of the Canadian Premier Junior Hockey League.

Baumgardner, an 18-year old senior at Karns High School, became exposed to the game at an early age and has been enamored with the game ever since.

“I always wanted to play professional hockey,” said Baumgardner, who was captain of the Bearden/Karns Ice Dawgs of the Knoxville Amateur Hockey Association’s High School League. “My brother was born in Houston, Texas and they had a team there and my dad took me to some game and I was hooked.”

Baumgardner, who helped lead the Ice Dawgs to the Tennessee State Blue Division Tournament where they posted a runner-up finish, developed a love affair with the game while attending Houston Aeros games in the Lone Star State. The Aeros played in the World Hockey Association from 1994-2013. He was a toddler then.

The Knoxville native, who is a member of the National Honor Society, first laced up the hockey skates when his family returned to East Tennessee. He was four years old. Hockey has been a part of his life for nearly 15 years.

“I love hockey and I’ve played since I was four years old. I’m 18 now,” said Baumgardner, who served as an assistant captain for Knoxville’s Junior Ice Bears, who recently competed in the National Championships in Green Bay, Wisconsin. “I love the game and I’m looking forward to going to Canada to play the game.

“I’m excited to be going to play up there.”

He is the first player from Knoxville to get the opportunity to play Canadian junior hockey. He signed his contract last month and the defenseman, who was the leading scorer for the Ice Dawgs, will begin his stint with the Essa Stallions during the 2018-19 season.

Being a Knoxville native, Baumgardner is a fan of the Southern Professional Hockey League’s Knoxville Ice Bears. He has won the Paul Lynch Scholarship two years in a row.

Lynch, a Knoxville player, passed away in 2010. His family started a scholarship fund in his memory. Baumgardner’s family and Lynch’s family are friends. Lynch’s parents are from Massachusetts. But they’ve made the trip to see Baumgardner play.

“It means a lot to me that they’ve come all the way down from Massachusetts to see me play,” Baumgardner said.”

Early in his hockey days, Ben wore Number 11. But he changed his number to 44 to honor Lynch, who wore that number for the Ice Bears.

“I always wore Number 11,” Baumgardner said. “But one year, somebody else had it.

Hockey has given Ben some unique opportunities on and off the ice.

“Playing travel hockey gives you the chance to meet different people and it the team becomes like another family,” he said.

“I watch more hockey [off the ice] and I play video games like other teenagers,” he said. “I teach younger players how to skate and handle the stick.”

He said that he might like to coach the game one day. But he’s looking forward to continuing his playing career now.

Baumgardner is a Detroit Red Wings fan. Nicklas Lidstrom, a retired Detroit defenseman, was once his favorite player.