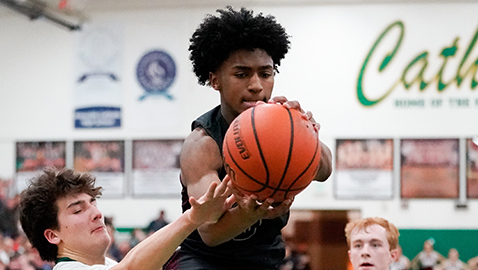 Bearden High’s boys basketball team is 19-1 overall and 7-0 in District 4-AAA yet has played only two games on its home court all season.

What’s also really scary good about the Bulldogs is the fact they have only one senior on their 12-man roster.

So will this be the year Bearden makes a run in the TSSAA state tournament or will it be next year or maybe both?

A very young Bulldog squad went one and done in Murfreesboro last season but at least got their paws wet.

Bearden notched one of its biggest road wins of the season Friday night, pulling away from Knoxville Catholic in the second half for an 81-68 victory.

The loss broke Catholic’s 33-game home court win streak that dated back to December of 2015 and also snapped the Irishmen’s 12-game win streak this season. Catholic (5-2, 12-1) hadn’t lost since its season opener at Maryville.

A big turnout was on hand for the showdown that matched teams with contrasting styles. Strong and physical Catholic had the tempo going its way for most of the first half and led 13-10 after the first period. The Fighting Irish trailed by only one (25-24) at halftime.

The slow tempo changed in the second half as Bearden outscored Catholic 56-44.

“After the first quarter or two it was just survive,” said Bearden Coach Jeremy Parrott. “We didn’t adjust very well to the way the game was being officiated and we ended up in a lot of foul trouble.”

Starting junior wing Drew Pember fouled out and junior post Shamarcus Brown spent much of the second half on the bench in foul trouble.

“We need to hit those free throws against them,” said Catholic Coach Mike Hutchens, whose team was 10 of 17 at the line. “You can’t have missed free throws and errant passes. We turned the ball over more tonight than we have all year in any game. That was a big difference. Their speed turns you over.”

LONE LOSS: Bearden lost to Columbus, Mississippi 58-55 at the buzzer in the semifinals of the Arby’s Classic holiday tournament in Bristol. The Bulldogs bounced back to beat Webb for third place.