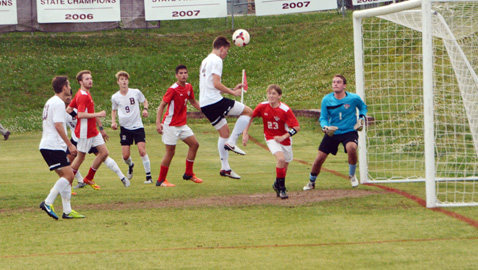 Bearden High School boys soccer coach Ryan Radcliffe admitted that soccer took a back seat Thursday night but he knew that his top-seeded Bulldogs had to play a District 4-AAA Tournament semifinal.

Bearden (16-3) did play and win as it eliminated fourth-seeded West High School with a 7-2 victory at Bruce Allender Field.

But the match, which was originally scheduled for Wednesday night, was postponed a day after a West High sophomore and junior varsity soccer player, Brown Smith, was killed in a car accident.

“It was just one of those mixed-emotion things,” Radcliffe said. “It was one of those times when you don’t want to let a sport get in the way of the day.

“But give West credit for even coming here and showing up to play. They have a good team. They have some good players and you can definitely say that West High soccer is back on the rise.”

Smith’s brother, Boyett, is the starting goalkeeper for the Rebels, who finish the 2016 campaign with an 11-6-1 record after struggling in each of the last two seasons. He played Thursday night and had a tough evening between the goalposts as Bearden scored five goals in the first 36 minutes despite having to shake off a little rust.

“I thought [the match] was a little rusty because we hadn’t played in about two weeks,” Radcliffe said. “It had been at least a week-and-a-half since we played our last game.”

The District 4-AAA Tournament began with the quarterfinals on Monday, May 9. The Rebels opened tournament play with a 2-1 win over Hardin Valley Academy at Bill Wilson Field. Conversely, the Bulldogs (the regular-season champions) had a first-round bye because Lenoir City was ineligible for the postseason due to a brawl in its league match against Farragut earlier in the year.

Once Bearden found its touch, things were decided in a hurry.

Kelvin Garcia, who had a first half hat trick and finished with four goals, gave the home side a 1-0 lead when he converted a penalty kick in the 14th minute.

Will Lewis extended Bearden’s advantage to 2-0 when he beat Smith with a header in the 20th minute. The Bulldogs picked up their third marker of the night when T.J. Seaman scored on another header approximately six minutes later.

The Rebels pulled to within 3-1 when Damian Meir tallied a goal on a direct kick in the 27th minute.

Garcia polished off his hat trick as he scored a pair of tallies to close out the scoring in the first half.

He and Lewis scored two goals after halftime for the Bulldogs, who played the championship match against Maryville on Saturday (results were unavailable at press time).

Both Bearden and Blount County’s Rebels have advanced to Tuesday’s Region 2-AAA Tournament.

On Thursday, Knox County’s Rebels got one more goal when Meir scored in the waning seconds of the game and of West High’s 2016 season.