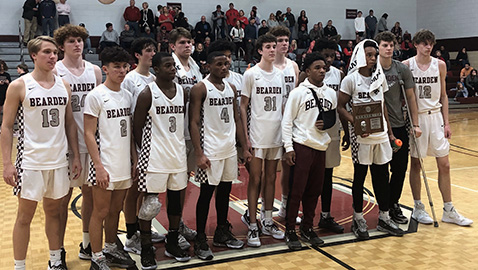 Last season the Bearden Bulldogs achieved their dreams, winning the Class AAA championship in boys’ basketball for the first time in program history. They’ve got some work to do if they are going to get back to Murfreesboro.

On Tuesday, February 25th, the Bulldogs fell to Maryville in the District 4-AAA championship game 70-56.  It was their third loss to the Rebels this season.

“I felt like we had a punchers chance in the game, even though we are undermanned in our lineup,” said Bearden head coach Jeremy Parrott. “Our point guard (Izaiha Bredwood) was hurt in the Farragut game. Tyler Nordin, our leading scorer, has been out since January, and then our other point guard Cahlib Edwards was out with knee problems, but I have confidence in the guys that were playing. I really do. We just didn’t do some key fundamental things in that game.”

The first quarter was played at a blistering pace, with rare whistles and only three fouls combined for both teams. The visiting Rebels led 16-10 after the opening eight minutes.

Bearden chipped away at the deficit in the second quarter, and after A.J. Pruitt knocked home two free throws in the final minute of the half, Bearden only trailed by a single point.  But the Rebels got a huge triple from junior Josh Seiler at the top of the key with less than a second on the clock. Maryville (26-4) took a 34-30 led into the locker room.

“I felt like we struggled rebounding early and it allowed them to keep a comfortable edge,” said Parrott. “We never really closed the gap like I wanted to.  We couldn’t come up with the key stop or key defensive rebound early on and it allowed them to stay up a couple of possessions most of the game.  I didn’t like that trend. The big basket there at the end of the half was a huge momentum swing in their favor, and they carried that over into the third quarter.”

That’s when the crowd in West Knox County saw Maryville senior Joe Anderson put on a show. During an 18-2 run by the Rebels to start the second half, Anderson scored 14 points, including two three-pointers and a couple of steals. The lead ballooned to 52-32, and the Bulldogs couldn’t recover.

In a losing effort, Bearden got a team high 25 points from sophomore Elijah Bredwood. Time and time again he drove to the hoop and made some spectacular shots.

“We are aware of what Elijah can do,” said Parrott. “Elijah has always been able to score the ball. He needs to continue to work on his defense and learning the scheme of the game, but he is a good young player with a lot of promise.”

Bredwood would be named to the District 4-AAA All-Tournament team, along with teammates Pruitt and Hayden Treadwell.

Bearden (22-8) lost a ton of talent from that state title winning team, including Drew Pemder (Tennessee) and Ques Glover (Florida). Some would think this would be a rebuilding year. The Bulldogs don’t see it that way.

The season would continue for the Bulldogs on Saturday night, February 29th when they hosted a Region 2-AAA quarterfinal against Central.

Mark Nagi is the author of “Decade of Dysfunction,” which takes an up close look at all that led to Tennessee’s crazy coaching search in 2017. The book is available on Amazon.