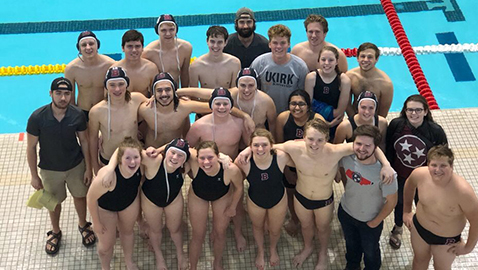 Water polo is an Olympic sport and played by most schools on the West Coast but the sport has been in Knoxville and Bearden High School since 2013.

It is alive and well at the school. The Bulldogs water polo club recently competed in the state tournament, which was contested at the University of Tennessee’s Allan Jones Intercollegiate Aquatics Center.

Bearden, which is one of three area schools to field a team, won one game in the tournament, which concluded earlier this month.

The Bulldogs defeated rival Sevier County 3-2 to pick up a tournament victory on Saturday May 5. Goalie Robbie Chadwell stopped several shots from the Smoky Bears in what Bearden coach Parker Miles called “a very defensive game.”

The Bulldogs coed squad got its goals against Sevier County from Mandi Chadwell, Grayson Maryanski and William Blake.

Bearden finished eighth in a nine-team field earlier this month in Knoxville and Miles, who played on Bearden’s inaugural team, which won a state championship in 2013. It was his senior year and the first season of the Tennessee State High School Water Polo League.

Bearden had a young squad in 2018 and despite an eighth place finish at the state tournament; Miles was pleased with his body of work this season.

“We had a young team this season and we had a pretty good season,” Miles said. “We started our season and we tied Brentwood and that was a team that finished fourth.”

The East Tennessee section of the high school water polo league is comprised of the Bulldogs, the Smoky Bears, Brentwood and L&N STEM Academy.

The power in the sport is in the West. Memphis Home Education Association went 17-0 this season and won its second consecutive State Championship. Christian Brothers was runner-up.

Miles is looking for big things next season as the Bulldogs lose just four seniors. Bearden looks to have five starters returning for the 2019 season.

Blanco just concluded his senior season and starred on both offense and defense for the Bulldogs. Robbie Chadwell, a goalie, scored a goal in Bearden’s Sectional Game against the Gryphons.

“He scored a buzzer beater against L&N STEM in our Sectional Game on and he was pretty excited,” Miles said. “And I don’t think that I’ve ever been more excited as a coach.”

For now, water polo is a co-ed sport in Knoxville and Bearden had several girls who contributed in the recently concluded season.

Miles said that he’s hoping to spark enough interest from female players to someday start a girls league in Tennessee.

The area coaches are also seeking to expand the sport as a whole.

UT fields a club team and Miles said that he is hoping to have camps for middle school players over the summer.