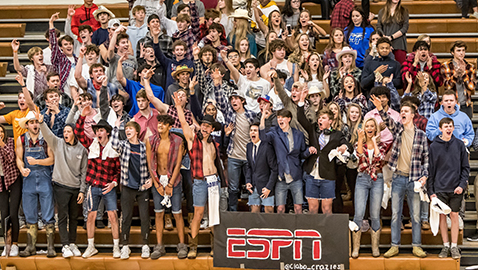 Farragut wanted to play the spoiler role on Valentine evening, but the Bearden Lady Bulldogs would have no part of it.

Coach Justin Underwood’s girls trailed by four points early but led at the end of each period and eased out of reach down the stretch for a 53-42 victory that gave them the District 4-AAA regular season title Friday at Lynn Sexton Gymnasium.

A win by the Lady Admirals could have prevented their rivals from clinching the district outright, but Bearden (13-1, 25-2) finished one game ahead of Maryville (12-2, 25-3).

The game was much closer than the final score. The Lady Admirals were within five points (45-40) inside the final two minutes.

But after her teammates had missed the front end of two 1-and-1 free throws, Bearden’s Jah’niya Bussell stepped up and swished in four in a row and Emily Gonzalez added two more to enlarge the final score.

Underwood felt the key to the win was his team’s play “defensively and then sharing the ball offensively. We hold a really good team to 40 points and we’re hitting free throws with next person up down the stretch.

“Our defense sometimes in the second half led to our offense, which in a close game like that, every possession is crucial.”

Bearden had a balanced attack. Gonzalez and Zneyah McLaughlin scored 11 points each. Bussell tallied 10 and Emma Stone nine on three big 3-pointers in the first half. Jakhyia Davis and Avery Treadwell added six each.

“It was close for 3½ quarters,” said Farragut Coach Jason Mayfield. “They just made some plays at the end and we got a little careless with the ball. They are a great team and they proved it tonight.”

After having only one turnover in the first half, Farragut committed seven in the final two periods.

The Lady Admirals took a 10-6 lead in the opening quarter when Wyatt drilled a long 3-point shot from the left wing. Bearden, however, managed to move ahead 12-10 by the end of the quarter, thanks to Stone’s first trey.

Davis fed Treadwell for a basket that put the Lady Bulldogs up 45-38. Farragut would get no closer than five the rest of the way.

“The games only get bigger from here, no matter who the opponent is,” said Coach Mayfield, alluding to the fact that the district tournament starts Monday (Feb. 17) at Bearden.

And if fans gave Bearden a Valentine card on the way out the door, it might have read: “No bones about it, you are top dog.”

BROOM, PLEASE: Bearden’s boys made it a sweep, outscoring Farragut 21-5 in the final period to win 61-46. The Bulldogs’ Cahlib Edwards scored a game-high 20 points.

Robert Geron, Farragut’s leading scorer this season, got in foul trouble and did not score through the first three quarters. He finished with five points.

The Admirals were coming off a 73-71 overtime win at Fulton Thursday night.