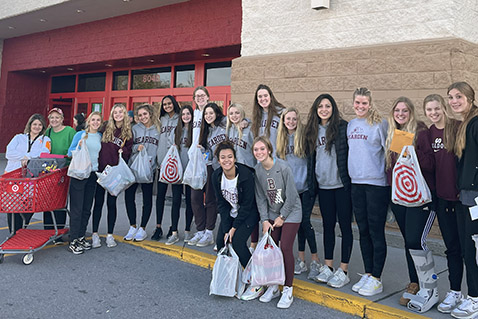 “That is an awesome accomplishment and that team had incredible perseverance – one of the pillars of our Careacter Star program,” he said.

Moore wanted to honor more than five players – the standard amount that is recognized on each team. He wanted to recognize every member of the team that had displayed “good careacter” through the extra long season to win the championship.

That included players and team managers and totaled 17.

“We’ll make that a new precedent, too, for recognizing first time ever state champions,” added Moore.

Coach Justin Underwood’s Lady Bulldogs were a motivated ball team when they opened their 2021-22 season. They had not forgotten the feeling of losing their quarterfinal game to Hardin County 48-39 the year before, after reaching the state tourney with a 30-1 record.

Underwood was asked how careacter came into play in the team winning its first state championship this year.

“I think every coach has at some point mentioned attitude and effort to their players,” he said. “This group, for us, was as good as you will find having a positive attitude in the good times and an encouraging attitude when the times aren’t so good. I think our team attitude was a big part of our success this season.”

Four of their five starters from the 2020-21 team were back on the scene when the Lady Bulldogs arrived at Murphy Center in Murfreesboro on March 9 for their quarterfinal game against Blackman, a program that has had a lot of success in girls basketball, including a state championship in 2021.

Bearden just had a lot of determination. And that was evident in its 56-34 win over the Blaze.

The Lady Bulldogs followed with a 74-55 victory over Beech in the semifinals and then beat Knox County rival Farragut for the fifth team to claim its first gold basketball.

It should be pointed out, however, it takes more than success on the hardwood to be recognized as a Careacter Star Athlete. Members of the Bearden girls basketball team – all 17 of them – checked off the other boxes, too.

When asked to give specific examples of “good careacter” his team members had exhibited this past season on or off the court, Coach Underwood had a beautiful one.

“This year for Christmas each player was a secret Santa for a pre-school aged child that doesn’t have much,” he said. “Each girl bought gifts to help brighten up their Christmas. It was a great memory that our girls will cherish. They had so much fun shopping and giving their time and gifts to someone else.”

“These young ladies are excellent examples of high achieving basketball players,” he said. “They are excellent students with a team GPA over 4.0 and they are active in clubs and within the community. They are special young people that exemplify what Coach Moore started in the ‘Careacter’ that student-athletes should possess.”