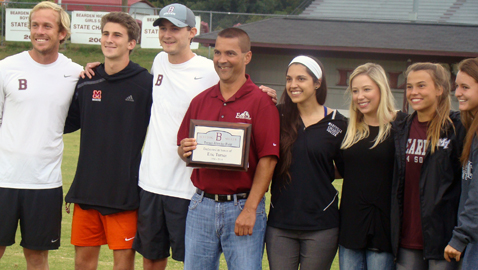 Turner, who coached both the boys and girls teams at Bearden until 2014, when he retired after the spring sports season. He became head coach in 1998. He won over 500 game and five state championships with the Bulldogs and Lady Bulldogs.

In addition to compiling a legendary coaching record in West Knoxville that included a 2002 National Championship while guiding the boys team, Turner was a key figure (along with Rick Radcliffe, Jim Kelly and others) in the construction of the previously named Bruce Allender Field.

The field was conceived, funded, and completed while Turner was the school’s soccer coach. The field has gone through several upgrades including installation of stadium lights, player dugouts, a concession stand and press box.

After Turner’s departure, the school added a locker room facility.

While Turner said that he was honored, he said that the Bearden soccer was about more than him.

“I’ve been back here a couple of times and it warms my heart to see that the program has kept up its tradition,” Turner said. “I’ve always said that this program was bigger and more than about one person.

“We’ve always had support from the community and from a lot of people.”

Turner said that the soccer programs are in good hands with his former player.

“When I left, I wanted to make sure that they hired a Bearden person,” Turner said. “The administration made a great hire with Ryan.

“Ryan knows what the program is about. He knows what Bearden soccer is about because he played here. He’s kept the tradition going,”

He guided the boys to three state championships and was at the helm for 276 victories.