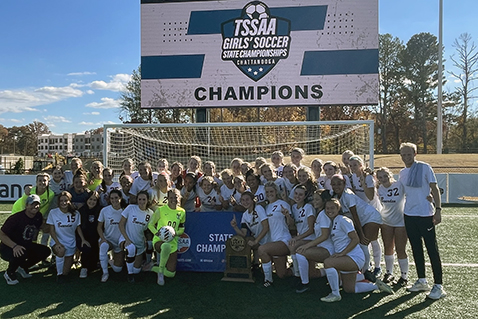 The Bearden Lady Bulldogs have played all season long with massive expectations, after an unbeaten 2021 campaign that ended with a state championship.

Being ranked number one nationally for most of the season by United Soccer Coaches bumped up the pressure as well.

But on Saturday, October 29, Bearden put the finishing touches on another spectacular season when they knocked off rival Houston 3-1 in the Class AAA state championship game at CHI Memorial Stadium in Chattanooga. The Lady Bulldogs finished the 2022 season with a 24-0 record.

“Who could have thought that you could do that? You see all the time that soccer is a cruel game,” said Bearden head coach Ryan Radcliffe. “How can you hold on to a ranking that long with that big a target on your back, without losing a game and with giving up 3 goals all year and hold that pressure and find a way through all of it… sometimes you don’t play your best, but you find a way to win.”

Bearden struck first against the Mustangs when junior forward Breana Mendoza was taken down in the penalty box. Junior fullback Rylie Lucas converted the penalty kick, and Bearden led 1-0 in the 23rd minute.

In the second half, Bearden picked up their second goal on a counterattack. Freshman forward Jayla Blue beat the Houston keeper Sophia Dawe, but the shot hit the post. Murphy was there to bounce on the rebound, and the Lady Bulldogs took a 2-0 lead with 24 minutes to go.

“To be honest that was one of our rougher games all year,” said Murphy, who finished the season with 41 goals. “We were tired, but we fought through it.  At the end of the day, we said that we were gonna have more heart than them and we are gonna prove it.”

Houston entered the game with an 18-0-1 record and cut the deficit in half seven minutes later when Lauren Fang converted on a penalty kick. Just when it looked like the Mustangs were going to spoil the Bearden party, Mendoza reestablished a two-goal cushion.

Mendoza forced a turnover, then carried the ball into the left side of the box. She powered a shot past Dawe, and Bearden was up 3-1.

“I thought they had momentum at the start of both halves,” said Radcliffe. “Just a huge individual effort by Bre. We’ve had different people step up all year and do that for us. We went deeper today than I’ve done in a lot of other games in terms of bench. Everybody played a part.  We have 42 people that played a role in this, and we needed everyone one of them today.”

Bearden finished this two-season run with a combined record of 47-0-1. Their senior class features multiple players that will play at the next level. Murphy is committed to South Carolina. Goalkeeper Peyton Huber will play at Liberty. Midfielder Rebecca Roth will play at Western Kentucky.

But this was the final time that they will play together, and they certainly went out in grand style.

“You can say that they made history, but I don’t know if they understand the history that they did make,” said Radcliffe. “I don’t know a record we didn’t break this year. Number one in the country. Defending state champion that hasn’t lost a game in two years. I don’t know how often you see that done.  There is so much talent across the state, and to be able to do that?  How can you overlook that…  What an unreal year.”