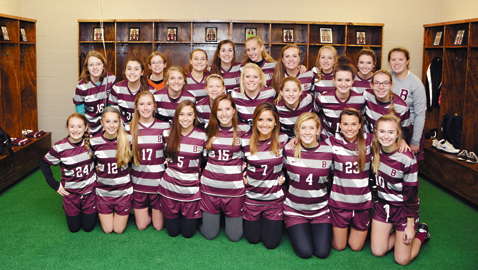 “I always set my goals high,” Radcliffe said before Bearden High School unveiled its new locker room facilities. “These kids come here and take pride in the program. This is a dream.

“The kids will take pride in this and the last thing they want to do is have somebody come here and beat them on their field.”

Radcliffe played at Bearden and he’s literally seen the school’s soccer complex grow up before his eyes.

“I remember when this [Bruce Allender Field] was a parking lot,” he said. “I remember after practice, when we took the light poles across the field.”

Bearden has always taken pride in its soccer field. Ryan’s father, Rick, has been the groundskeeper since the field opened. And the field was a great source of pride for former boys and girls soccer coach Eric Turner, who resigned as coach last spring.

Radcliffe took the reins and both the Lady Bulldogs and Bulldogs host elite high school tournaments. The new coach expressed gratitude to former Union County High School coach Darrell White, who constructed the lockers, and to Tim Scott and William Daniels, a pair of soccer parents who oversaw the project, which was designed and built in a little more than a month.

Daniels noted that Tuesday night was special for him.

“We want the program to rise again,” Daniels said. “We’re the only public school east of Nashville that has our own locker room. Ryan told me that this was his dream and we assured him that money wouldn’t be an issue.”

“I went to Bearden. I played football and I was on the track team,” he said. “I graduated in 1986. Bearden has the same facilities as some of the private schools and that’s a testament to the parents and the community.

“We have people who went here in the 60’s who come to our sporting events. This is about Bearden. It’s not about the coaches or the players. Coaches and players come and go but Bearden is always here.”

Radcliffe noted that he wants the current players to return after their time at the school is finished.

“I want these kids to come back and bring their kids,” he said.

“People made this happen,” he said.

The Lady Bulldogs celebrated the opening of the facility by playing a brief intersquad scrimmage in their new uniforms. After the pick-up match, the players, parents, coaches, boosters and parents had a dinner.

The boys team will also use the new locker room during their season.