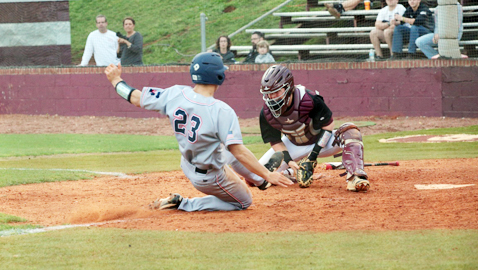 Bearden High School’s baseball team got off to a horrendous start in 2016 but it looks like the Bulldogs might be turning things around just in time for the District 4-AAA Tournament.

Bearden had to work a little overtime on Monday, April 24, to notch a big league win over rival Farragut before a packed an spirited house at Phil Garner Ballpark.

The game ended 10 innings and nearly four hours later with the Bulldogs leaving the field with an 8-7 victory.

The game ended with two outs in the bottom of the 10th when third baseman Nate Adkins scored the winning run on a throwing error after he swiped third base.

“This feel great,” said Adkins, who reached on a two-out single and took second when Brandon Trammell drew an intentional walk. “This was a really long game and we were finally able to win it.

“It always means a lot to beat Farragut. This is big for us. We’ve won our last three district games against West, Maryville and Farragut. Those are the top three teams in our district. This is a good way to be going into the district tournament.”

The District 4-AAA Tournament will begin May 5 and the Admirals (26-5 overall, 11-2 in the district) will be the No. 1 seed and host the top half of the bracket at John Heatherly Field at the Ballpark in Farragut. The other seeds were not set at press time.

Despite seeing his team leave Bearden with the regular-season title, Farragut coach Matt Buckner was disappointed with his squad’s effort against the Bulldogs (14-17-1, 6-7).

“They were on a roll coming in here and put a stop to that. As far as seeding, this didn’t hurt us. We wrapped everything up last week. It probably meant something for them.”

The one person Buckner praised was reliever Landon Smiddy, who was tagged with the tough luck loss in the game that snapped the Admirals’ 15-game winning streak.

“We didn’t pitch well, except for Smiddy,” Buckner said. “He did a good job.”

Smiddy went 3 2/3 innings and struck out six in the contest.

Farragut seized the upper hand early as the Admirals and opened a 2-1 lead in the second inning when a double by Carson Wright plated Cade Burkey.

Wright scored the game’s first run on a wild pitch before the Bulldogs pulled even when an RBI single by Keith Gabrielson allowed designated hitter David Beam to score.

The Admirals took a 5-1 lead in the top of the third as Jake Grooms had an RBI single and Bearden helped its rival’s cause with a pair of errors that resulted in two more runs.

In the bottom of the third Trammell had a scoring single and Gabrielson added a two-run double to trim Farragut’s advantage to 5-4.

Zach Yunger homered for Farragut to make the score 6-4 in the top of the fourth.

The Bulldogs tied things in the bottom of the fifth as Beam homered and Jacob Belsey knocked in a run on a fielder’s choice.

The Admirals went up 7-6 in the eighth when Jake Hagenow walked, stole second and took third on a wild pitch and scored on another wild pitch.

Bearden tied things in the bottom of the inning as Clark Poynter scored on a throwing error in a play similar to the sequence that ended the game in the 10th.

Bearden coach John Rice was pleased with his team after the victory.

“I’m really proud of our kids,” he said. “Baseball has knocked us down this year and we’re doing everything we can to scratch out wins.”