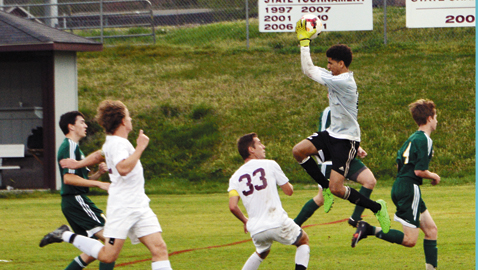 Bearden High School boys soccer coach Ryan Radcliffe finally saw his team produce the results he wanted when it focused and went back to basics.

“Credit Gallatin,” Radcliffe said after his Bulldogs notched a 4-1 win over the Green Wave Thursday night in the opening round of the Bearden Invitational at Bruce Allender Field. “Our focus wasn’t there early. Gallatin came out and started strong. We were flat.

“We were living off our first two wins. Sometimes, the boys forget that we’re Bearden and they forget that we’re always going to get everybody’s best game. After the slow start, everybody tried to complicate the game. Once, we simplified the game, we did a better job.”

The Green Wave (2-2) took an early lead when Antonio Aquino converted a penalty kick in the 11th minute after Bearden (3-0) was called for a foul in the goal box.

The Bulldogs missed some early chances. Gabe Alvarez missed an open goal when he directed a header over the top of the crossbar in the 19th minute.

But Alvarez, a senior forward, or Bearden didn’t stay off the scoreboard long. Alvarez tied the game in the 33rd minute when he chipped the ball over Deonta Kensinger’s head and into the back of the Green Wave net in the 33rd minute.

Alvarez’s first goal of the match started a barrage of four unanswered markers for the Bulldogs, who took a 2-1 lead when Emre Ucack scored later in the 33rd minute.

Radcliffe saw his side finish the first half with a flourish but he was far from happy with his team’s effort over the inaugural 40 minutes of the match.

The coach felt a little better after the Bulldogs stepped things up after halftime.

“I really like the way that the boys responded after an ugly first half,” Radcliffe said.

Bearden outshot Gallatin 19-4 in the match and 12-1 in the opening half.

“He’s a good goalie,” Radcliffe said. “He stopped some good shots and he did a great job.”

Kensiger, however, had no answer for Alvarez in the end. The Bearden forward closed the scoring with a pair of goals in a five-minute span.

His marker in the 62nd minute gave the Bulldogs a 3-1 lead and was assisted by Jonathan Meyshik.

Alvarez tallied again in the 67th minute off an assist from Michael Tarintino.