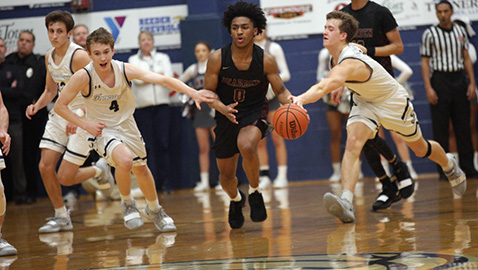 Bearden was able to put a check mark by one of those aspirations on Monday, Feb. 11. Sure, it was a small step, but each journey begins with one of those.

“Going into the season, we had a lot of goals,” Glover said after the Bulldogs closed out the regular season with a 78-33 over Kingston Pike rival Farragut at the Lynn E. Sexton Gymnasium. “We want to get back to the state and we want to win it this year. We want revenge.”

Bearden (23-5 overall, 15-1 in District 4-AAA) won a share of the regular-season district championship. The Bulldogs split the title with Maryville but they claimed the No.1 seed in this week’s district tournament by virtue of winning a preseason draw against the Rebels.

Bearden has made the Class AAA State Tournament each of the last two seasons. But they haven’t brought the golden ball back from Murfreesboro.

A state title is another goal for the Bulldogs. But that objective is still a long way away and Bearden coach Jeremy Parrott wants his squad to know every game carries equal importance for his veteran squad.

And the regular-season finale was no exception as the Bulldogs needed a win to secure a share of the title and the postseason tournament’s top seed.

“Every game is important and it’s our job as coaches to make sure that our kids understand that,” Parrott said. “If we would’ve lost this game tonight, it would’ve put us in bad shape for the tournament.”

A loss would’ve bumped the Bulldogs to the No. 2 seed. They still would’ve earned an automatic bid to the Region 2-AAA Tournament, but no one wants to head into the postseason on a sour note.

“We wanted to win the championship and we had to win this game tonight to do that,” said Glover, who scored a game-high 21 points (including 10 in the first quarter) to help Bearden put this one away early. “We just have to take things one team, one game, one day at a time.”

“We came out and in the first eight minutes, we just did what we do,” Parrott said.

Glover got plenty of help from his veteran supporting cast.

Roman Robinson scored 13 points and had the first bucket of the game. Trent Stephney scored 10. Drew Pember, a University of Tennessee signee, finished the contest with nine.

Dillon Atwell scored 11 points to lead the Admirals, who trailed 45-14 at halftime.