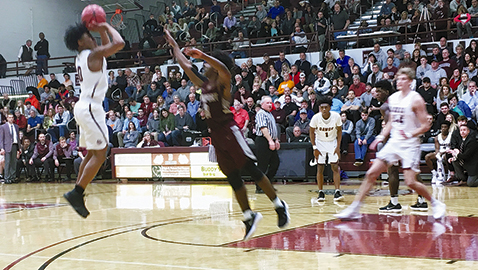 Bearden High School’s boys basketball team earned a shot at redemption on Monday, March 5. The Bulldogs now have a chance to take care of some unfinished business when they make a return trip to Murfreesboro for the Class AAA State Tournament.

“It feels great to be going back to state,” Bearden junior guard Roman Robinson said after the Bulldogs routed Kingsport Dobyns-Bennett 70-44 in a Section 1-AAA game at Bearden. “We’ll learn and grow from the game down there last year.”

The Bulldogs (37-1) had a short stay at the Midstate last year and that didn’t sit well with second-year head coach Jeremy Parrott or his players.

“When we left there last year, we knew that was where we wanted to go back to,” Parrott said after his squad pounded the Indians (27-9) into submission and ended Kingsport Dobyns-Bennett’s season. “I want to play basketball during Spring Break.

“We know where we want to be this time of the year and anything else is unacceptable. It’s all about steps. I certainly didn’t think we would be 37-1, but all we’ve done is take steps.”

The Bulldogs have battled adversity since late in the regular season and throughout their playoff run. First, the flu bug made its run through the team. Then, junior Drew Pember suffered an ankle injury in the Region 2-AAA Quarterfinals.

But Bearden wouldn’t be denied.

“Honestly, we knew coming into the coming back into the season that we wanted to get back there and show what we could do,” said Ques Glover, a junior point guard, who scored a game-high 19 points against the Indians. “We wanted to get back because we know that we laid an egg down there.

The Bulldogs were definitely the aggressors on this night as they opened a 19-4 lead before Dobyns-Bennett’s Marae Forman knocked down a 3-point shot as time expired in the opening frame.

Bearden would answer early in the second quarter when a Trent Stephney dunk made it 21-7 with 7 minutes, 31 seconds remaining in the first half.

The Indians finally showed signs of life after Stephney, who finished the contest with 18 points brought down the house with his jam.

Dobyns-Bennett would pull to within 24-17 before the Bulldogs ended the first half with an 8-2 run. Kordell Kah culminated the surge when he buried a long-range jumper to make the score 32-19 with 18.9 seconds left in the half.

From there the Bulldogs dominated things the rest of the way. Bearden outscored the Indians 19-9 in the third quarter and extinguished all hopes for a Kingsport comeback.

The Bulldogs again boasted a balanced scoring attack with Glover and Stephney leading the way. Robinson added 13 points (including 11 after halftime). Shamarcus Brown had eight points and Kah finished with six.

Senior Justin Ketterl finished his final game in Bearden’s gym as he made a dunk before being taken out.

That was also a special moment for Parrott.

“It was great to see him enjoy his senior night,” Parrott said.

Foreman and Riamello Wadsworth each finished with 16 points for the Indians.

Bearden will play Mt. Juliet on Wednesday in a first-round game.