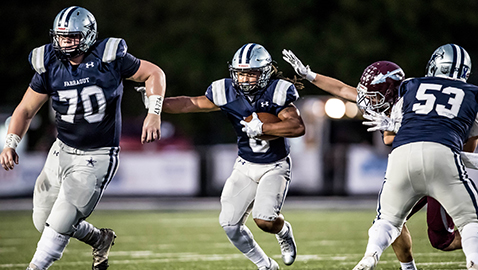 The Bearden Bulldogs will host the Farragut Admirals this week in one of the state’s top high school football rivalries.

“The rivalry is special because of the history and tradition between the schools,” said Bearden Head Coach Morgan Shinlever Saturday.

“With the two schools being so close in geographic location, many of the students have friendships or connections outside of the school setting so it adds to the rivalry.”

Fittingly, the Region 1-6A battle will be this week’s Rivalry Thursday TV game on MyVLT.

The Admirals have held the upper hand in the series in recent years.

“Bearden’s only two wins over the past 15 years were in 2007 and 2012,” noted Jack Tate, Bearden’s Sports Infomation Director.

The Bulldogs are coming off an open date after a 33-30 come-from-behind win over Dobyns-Bennett at Kingsport in Week 7.

“You do not have a single player that leads a comeback of that nature in 6A football,” pointed out Shinlever. “It was a total team effort all the way down to the players that were cheering on the sideline. I’m extremely proud of those young men.”

That same night, Daniel Bethel kicked a game-winning field goal with less than two minutes to go to lift the Admirals to a 23-21 victory over Science Hill at Johnson City.

“Daniel is a sophomore and doing a great job as our kicker,” said veteran Farragut Coach Eddie Courtney last week.

FRIDAY FIREWORKS: Seven teams in Knox County will have open dates this week, but there’s still a few dandies slated, including Gibbs at Halls, Campbell County at Fulton, Chattanooga Christian at Webb School and Sevier County at Seymour.

PREPS OF THE PAST Fifteen years ago, Oct. 4, 2003 – Albert Harris, a shifty junior running back for Austin-East, had touchdown runs of 69, 60 and 54 years as the top-ranked Roadrunners celebrated homecoming and remained unbeaten in Region 2-3A with a 40-6 win over Lenoir City. Harris finished his big night with 261 yards rushing.