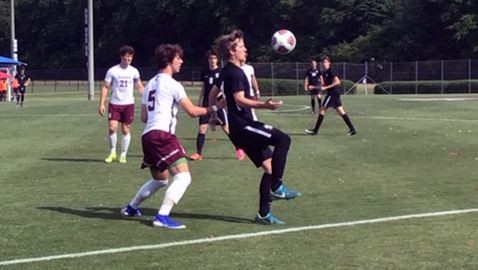 What a week for the Bearden Bulldogs…

Taking the momentum of a sectional victory over rival Farragut with them two and a half hours to the west, the Bulldogs won three games in four days, on their way to capturing their fifth state championship, culminating with a victory over Station Camp. (The game officially ended 1-1, with the Bulldogs named champion after a 4-2 penalty kick advantage.

“We kind of talk about the games and moments we have to get through to get to state,” said Bearden head coach Ryan Radcliffe. “A region championship isn’t one of those ways. We would have liked to win it, but it (1-0 loss to Science Hill) was a good wake up call for us. There were some mental lapses where we tried to let talent take over in that game. I think we proved this week that you don’t have to have talent. These boys have some of the biggest hearts I’ve ever coached. This team has some big hearts. That goes a long way, and that is a good message for a lot of people.”

It all started in Murfreesboro with a dominating 4-0 win over Oakland on Tuesday, May 21st. Then came the marquee matchup of the tournament a day later. The Bulldogs played previously unbeaten powerhouse Brentwood. It was a physical matchup that was scoreless into the latter stages of the second overtime. That’s when Collin Lewis played the role of hero with a perfect free kick from the top of the box. That goal in the 96th minute gave the Bulldogs a 1-0 victory, and earned them a spot in the championship game against two-time defending state champion Station Camp.

On Friday, May 24th, the Bulldogs and Bison played in sweltering conditions at the main field of the Richard Seigel Soccer Complex.

Wilkins, better known for his exploits on the football field, made a heads up play late in the first half. Station Camp was attempting to restart fast on a free kick, and Wilkins wasn’t fooled.  He stole the ball near midfield, and passed to Collin Lewis. Wilkins then began his run and was fed perfectly by Lewis. Wilkins took a couple of dribbles ahead of the Bison defense, and shortly before they caught up to him, Wilkins took the shot with his right foot. It beat Station Camp keeper TC Craig, and the Bulldogs had a 1-0 lead.

With less than 28 minutes to go, the Bulldogs had a chance to extend the lead when Station Camp’s Hunter Beaty was called for a handball in the box. Lewis lined up to take the kick. He beat Craig, but not the cross bar, and the game stayed 1-0.

With less than 16 minutes remaining, Station Camp finally broke through. On a beautifully designed corner kick, Donovan Smith started with a short pass, which was followed by two more short passes. A hard shot was cleared inches from the goal-line by the Bulldogs defense, but a rebound by Bison senior Josh Street found its way through a few bodies from about eight yards out. Bearden keeper Holden Giesecke was beaten for the first time in over 250 minutes in Murfreesboro, and the game was tied at 1.

“Right after they scored I knew we had to come back, but I had full faith in my team,” said Giesecke.

With under six minutes to go, Station Camp nearly took the lead on a shot from sophomore Cade Maclean, but his effort missed the far post by inches.

At the end of regulation, a long ball into the box led to a collision between Craig and Lewis. Bearden fans pleaded for a foul on Lewis, but none was upcoming.

So we went to overtime.

The game would be decided by penalty kicks.

Teams swapped PKs in round one. Then, Giesecke made the biggest save of the season, stopping Station Camp senior Spencer Miller. “I told the team they worked their butts off for me, so it was my turn to show off for them. I’m just glad I could make the save.”

Next up for Bearden was Lewis, who was still thinking about the PK he missed in the second half. This time, his stutter step fooled Craig, and the kick was true.

“Right after overtime I went up to my teammates and asked ‘Do you want me to take this,’” said Lewis. “I know I buried some earlier in the year, but the miss was still on my mind.

“They put their arms around me and said ‘We need you.” When they told me they needed me, I knew I had to step up. It’s amazing. I love these guys.”

Finn Harris and Carter Turner converted their penalty kicks, and when Bison senior Tyler Jessen hit the cross bar, the Bulldogs were champions.

Eight seniors on this Bearden team will play soccer in college in the Fall.  “This senior class is just built tough,” said Lewis. “If you look at our road it was just ridiculously hard. I think Farragut, Bentwood and Station Camp are arguably the three best other teams in the state, and we beat all of them to get here. This team is just built different. The heart on this team is ridiculous. We just wanted it more, and that was the difference.”