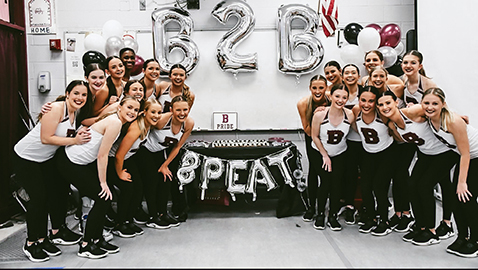 The coaching staff set the tone and the senior class took it from there.

And as usual, even in an unusual year, Bearden High School took top honors in two categories in the 2020-21 TSSAA Dance Championships. This year Bearden won state titles in Large Varsity Jazz and Large Varsity Pom.

Trina Melton of the TSSAA announced the results of the Cheer and Dance State Championships in a free live stream on YouTube Tuesday, March 9.

The Awards Show also included the announcement of the TCCA All-State team and Tennessee’s Cheerleader of the Year.

“This year has been different as we all know, but as a team we have tried to be as normal as possible,” said Bearden dance team Head Coach Hannah Keathley the following day.

“We have not let ourselves give up when faced with difficult circumstances and have chosen to make the best out of this year no matter what it looks like. Our senior class is made up of eight strong, hard working athletes and they have been a driving force this year.”

Due to COVID-19, this year’s TSSAA Cheer and Dance events were conducted in a virtual format.

“Competing virtually was a new and different challenge for us,” said Keathley.

“Our athletes love to be able to perform in front of an audience and that was one of the things that were taken away. We are thankful for the support that our school gave us in letting us film in our home gym, but it made it extra challenging to recreate the energy of a live performance with no audience. This team surpassed all expectations and was able to create two really strong performances despite these challenges.”

The TSSAA Championships recognize middle and high school cheer and dance teams in 35 categories of competition and are normally held in December of each school year.

TSSAA worked with the Universal Cheerleaders Association for several months to identify a suitable venue for holding the championships in person, but ultimately decided to hold the event virtually using UCA’s online competition system.

A UCA / UDA trained judging panel scored the routines just as they would have at an in-person event.

Bearden has now won 13 state championships since its first in 2009. This also made the eighth year in a row for the school to win a Jazz title.

Now it’s on to the Nationals!

“We plan to compete virtually in the UDA National Dance Team Championships in April,” said Keathley.

Farragut repeated as the Jazz and Pom state champions in the middle school competition.

The Tennessee Cheerleader of the Year is Ella Harrison of Morristown East High School.