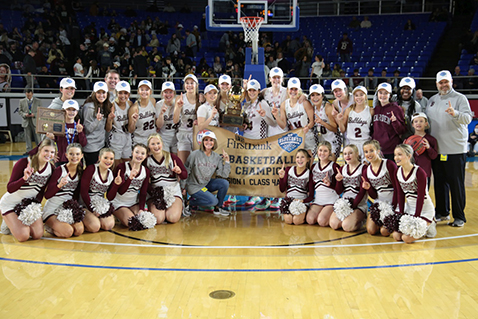 Bearden High had a 1-2 punch that was too much to handle for Knox County foe Farragut Saturday night in the BlueCross Basketball Championships.

Junior post Avery Treadwell’s dominance on the inside with 15 points and 16 rebounds and point guard Bailey Burgess’ 4 of 9 shooting from 3-point range powered the Lady Bulldogs to their first ever state title in a 52-34 Class 4A win over arch-rival Lady Admirals at MTSU’s Murphy Center in Murfreesboro.

It was Bearden’s fifth win over Farragut in five meetings this season, and it earned Coach Justin Underwood’s Lady Bulldogs the Gold basketball trophy.

“This was a special group of players,” said Underwood. “They played so hard on the defensive end and shared the ball as well on the offensive end.

“I’m so proud of this group and what they accomplished. To bring a state title back to Knoxville and to a great school and community like Bearden is an amazing feeling.”

Runner-up honors and the Silver basketball weren’t too bad at all in Farragut’s first time in the state tourney.

An overwhelming 12-0 advantage in second chance points played a big part in the title win. Bearden also connected on 7 of 18 shots from 3-point land as a team.

Farragut (28-9) got 14 points from Ace Strickland and 11 from Ashlyn Sheridan. Annalise Bishop chipped in nine.

Coach Jason Mayfield’s squad came on strong at the state tourney but managed to shoot only 31 percent from the field in the finals and was 5 of 23 from 3-point range. The Lady Admirals also only attempted three free throws in the contest and made one.

The game started slowly from an offensive standpoint and Bearden led 8-2 after one period of play. Scoring picked up in the second period, and the Lady Bulldogs went into the dressing room at halftime with a 22-14 advantage.

After three quarters, it was 36-27 Bearden and the Lady Bulldogs pulled away in the final period, outscoring Farragut 16-7.

“After last year losing at state, we were more motivated this year and we had one goal as a team. Win state,” said Hannah Claire Stephens, a senior guard.

Maddie Brillhart, a senior forward, added: “It’s awesome to be a part of history and bring back a gold ball to Bearden!”