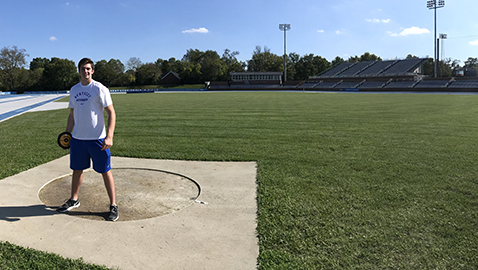 The better the weather, the better Josh Sobota performs in the discus and shot put events.

That was the case recently as the Bearden High senior set personal records in both events.

He threw the discus 194 feet, 7 inches – his personal record – at a Bearden home meet April 12 and followed up that weekend with an outdoor personal record of 67-3¼ at the Bojangles Track and Field Classic April 13-14 in Columbia, S.C.

Both of those marks are No. 1 in the state for high school athletes this season as of Friday, April 20, according to the Tennessee Runner MileSplit Outdoor Rankings.

Sobota, the defending TSSAA state champion in both field events, will be one of the top attractions in the annual Knoxville Interscholastic League meet April 30 (field events) and May 1 (track events) at Hardin Valley Academy.

Action will start at 6 each night, with athletes from all high schools in Knox County competing.

“Weather was a challenge with the start of our season,” said Bearden Coach Patty Tracy-Thewes last week. “We had three of four meets cancelled before completion of the meet. It was definitely not ideal throwing weather.

“Once the weather broke, Josh seemed to get back in his groove again. We are looking forward to seeing him continue to excel this season.”

Sobota, who was scheduled to compete in the annual Volunteer Track Classic at UT this past weekend, set a state record in the TSSAA meet last year with a throw of 190-3 in the discus. He heaved the shot 63-8¼ at the 2017 Spring Fling.

Willington Wright, who announced last week he would be continuing his track and field career after high school at Middle Tennessee State University, also will be in the spotlight at the KIL meet.

Rebecca Story of Christian Academy of Knoxville, a Stanford signee, also will be competing in the KIL meet for the final time.

In her first meet of the outdoor season, the Ben Martin Invitational in Oak Ridge on April 6, Story posted a 5:02.9 in the 1600 run – the state’s top girls’ time of the season.

Hardin Valley swept the KIL team titles again last year. The HVA girls will be going after their seventh straight championship this season. The HVA boys will be trying to make it two in a row. The Hawks had their three-year reign snapped by Bearden in 2016.

With Wright running a leg on the 4×400 relay, the Hawks placed sixth in the national indoors.

JACOB SOBOTA, Josh Sobota’s brother, is competing as a multi-event athlete at Duke and has been successful in his first year on the collegiate level. He placed second in the heptathlon at the Atlantic Coast Conference Indoor Championships held at Clemson in March.

This outdoor season he’s competing in the decathlon. Last week he was at the Bryan Clay Invitational in California, competing against top decathletes in the nation (college and professional). The ACC Outdoor meet will be held in Miami in May.

Sobota placed second in the TSSAA state decathlon as a junior in 2016. He was ranked No. 1 in the decathlon and pole vault as a senior, but couldn’t compete in the state meet due to an injury.