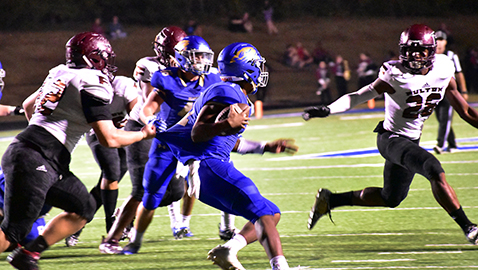 The taste of victory would be the prize at the R. T. Everette Sports Complex in Karns Friday night.

In a Region 3-5A matchup of two 0-4 teams, the host Beavers came out on top 28-20 against a young Fulton team and all of a sudden their season looks much brighter.

“This was the first step we needed to take to be able to qualify for the playoffs,” said Coach Brad Taylor.

Even if the Falcons are now 0-5, Karns senior Neyland Fendley said it meant a lot to beat Fulton.

“They’re one of the big bad names of our region and we took them down tonight,” said Fendley, who plays offensive guard and defensive end. “I’m so proud of our guys, the commitment we’ve put in and the work we put in tonight. I couldn’t ask for anything more from us.”

Fendley racked it up as a definite confidence builder.

Fulton may have been playing a lot of freshmen and sophomores, but Karns had the Freshman of the Night. Running back Desean Bishop scored on runs of 41 and 9 yards and snagged a 27-yard TD pass from senior quarterback Jalen Tucker to stake Karns to a 21-0 lead in the first half.

“We did a lot of good things,” said Taylor. “Defensively, we probably played our best game of the season (Three times Fulton’s offense threatened but was stopped). Offensively, we ran the ball and didn’t turn it over. Obviously, that was a big thing. There’s a lot to build off of from this win.

“We’ve got to continue to improve and believe in ourselves and each other.”

Sophomore Seth Spires returned a second-half on-side kickoff attempt by Karns to the Beavers’ 30-yardline and junior quarterback Tommy Sweat cashed in the field position with a 6-yard TD run for the Falcons’ first score. Joseph Mojica added the PAT.

The Falcons didn’t quit either after Karns restored its 21-point lead. Sweat sparked a fourth-quarter rally with a 42-yard scoring run up the middle and junior running back Mac McCovery’s 6-yard TD run with 4:08 remaining pulled Fulton within eight.

However, Karns put the ball in Bishop’s hands and Fulton couldn’t stop him to get it back.

“I think they played harder than we did with maybe the exception of the fourth quarter,” said Fulton Coach Rob Black. “We’ve got to learn to reach down inside of us and grit it out a little bit. We’re not doing that for four quarters and we’ve got to get that done.”

Fulton has an open date this week and the Falcons will get back to the basics.

“The big thing is we’ve got to go back and start teaching some fundamentals again,” said Black. “It’s probably the youngest team I’ve ever coached. But it’s not an excuse. It’s on all of us and we have got to go back to work this week.”