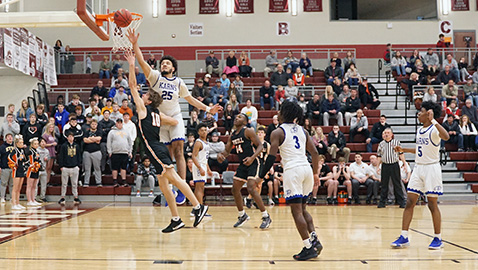 Give veteran Karns High basketball coach Lee Henson credit for thinking ahead in the closing seconds of the Beavers’ 62-61 double-overtime quarterfinal win over Powell in the District 3-AAA tournament Thursday night at Oak Ridge.

With Karns leading by one point, Trey Hawkins missed both ends of his double bonus free throw attempts with 10.5 seconds left and Powell had a last chance to win the game.

Sutton never got his hands on the ball and Colton Webb and Eli Walls misfired on shots inside as Karns held on for the win.

“I’m getting up there in age, but that’s really going to get me up there,” said Henson after the do-or-die thriller. “Both teams did a good job of battling and had a chance to win. Usually when Powell and Karns play each other, it’s going to be a blood bath and that’s what it was.”

The victory assured No. 4 seed Karns of three more games in the post-season, while the emotional loss ended Powell’s season. The Beavers were scheduled to play top seed Oak Ridge in Saturday’s semifinals.

“If we could have made some free throws down the stretch, I think we probably could have pulled it out,” said Powell Coach Gary Barnes. “Other than that, we had a game plan and they followed it. We had our chances. We just didn’t finish it.”

Girls and boys consolation games will be tonight (Feb. 24) and the championship games Tuesday night, starting at 6 p.m. The top four girls and boys teams will advance to the Region 2-AAA tournament.

Karns led 14-13 after one stop, but the Panthers’ 3-2 matchup zone gave the Beavers fits in the second period and Powell pulled out to a 29-17 halftime lead.

Karns turned up its defensive pressure in the third quarter and got back in the game, slicing the Powell lead to one (37-36).

The fourth period stayed tight. A bank shot on a drive by Hawkins gave Karns a 46-45 lead, but a free throw by Parker Haley tied it with 14.9 seconds to go.

Hawkins was fouled with 0:00.2 on the clock but missed a potential game winner.

In the first overtime, senior post Traven Jackson’s rebound basket tied the score 53-all with 9.7 seconds to go. An off-balance jumper by Sutton missed the mark.

Karns built a six-point lead in the second OT, but Powell wouldn’t quit. Sutton stuck in a 3-point shot from the left of the key. Hawkins hit one of two foul shots to make it 62-58 with 19.8 seconds left. Sutton responded with a 23-footer seven seconds later to make it a one-point game.

Hawkins drew a foul at 10.5 and that’s when Coach Henson got in Bishop’s ear about stopping Sutton.

MORE FOR MOORE: Central junior guard Greg Moore poured in 25 points, including six 3-pointers, to lead the No. 3 seed Bobcats to a 56-43 win over Anderson County. Jaylon Harris and Darian Bailey added nine each and Te’Von Summers eight.

Central led by only two points with four minutes remaining but outscored the Mavericks 18-7 the rest of the way.