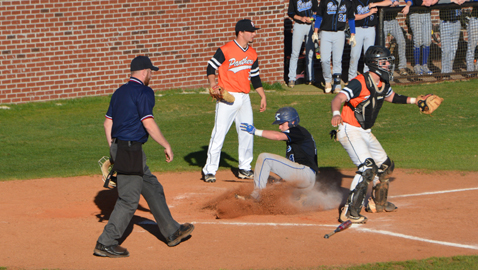 A long offseason came to an end for the Karns High School baseball team last week.

The Beavers had to wait an extra day but once they finally got on the field, they picked up a pair of crucial District 3-AAA wins over rival Powell. Karns beat the Panthers 1-0 at home Tuesday night before making the return trip to Danny T. Maples Field less than 24 hours later.

There, the Beavers nabbed a 5-3 comeback victory over Powell.

The 2016 was scheduled to open on Monday, May 14 but action was washed out as heavy rains pelted Knox County late in the afternoon forcing the game to be moved to Wednesday.

For the Beavers (2-0 overall, 2-0 in the district), the wait was well worth it as they had another day to seethe over a home loss to the Panthers (0-2, 0-2) in the District 3-AAA Championship Game. Both the Panthers and Beavers were eliminated in the opening round of the Region 2-AAA semifinals. The Panthers lost to eventual Class AAA State Champion Hardin Valley Academy while the Beavers fell to 2014 State Champ and 2015 runner-up Farragut.

“When we made the schedule, some of the guys called and asked me when we were going to play Powell,” Karns coach Matt Hurley said. “I told them that we would play them right off the bat.

“That last game against them really left a bad taste in our mouths. We had a 3-0 lead and we lost 5-4 after we won the title in the regular season. We don’t talk about that game anymore.”

Now, they don’t have to.

In Tuesday’s opener, Greg Tye outdueled Powell left-hander Noah Malicoat and an RBI single by Josh Fielden accounted for the game’s only run.

On Wednesday, the Beavers saw Powell ace Peyton Alford (another lefty) and were able to pick up another victory and swept the season series between the two rivals.

“We saw two great arms,” Hurley said. “We didn’t see Levi Everett and he’s supposed to be another one of their good pitchers.”

Karns made some mistakes in the contest at Powell but Hurley wasn’t about to throw the season sweep against the Panthers.

“I’m not real happy. This was sloppy but we don’t apologize for winning games,” Hurley said. “I told the guys we’re not ever going to be satisfied with where we’re at right now.

“Both teams made [mistakes] that they normally don’t make. Both of these teams are well-coached. I don’t know whether it was jitters or I don’t know if it was the fact that this was a rivalry game. But we were sloppy and we have to get better because I wholly expect to see these guys [in the district tournament].”

The Panthers took a 1-0 lead in the bottom of the second inning and the rally started when Powell leadoff man Matt Grim reached on a passed ball after striking out. Grim then advanced to second on a throwing error. He came home on a sacrifice fly by designated hitter Logan Ward to give the Panthers the edge.

The Beavers scored two runs in the top of the third. Shortstop Brian Bell walked to lead off the frame. He took second when Nick Beuchat singled and would later score the tying run when Alex Hames lifted a deep fly ball to center field.

Beuchat, who was the 2015 District 3-AAA Player of the Year, scored the go-ahead run on an RBI single by Chris Norton.

Beuchat had two hits Wednesday and picked up the win after pitching 2 2/3 innings of scoreless relief.  He had five strikeouts.

Karns answered in the top of the fifth and took a 3-2 lead when Norton singled home Hames.

Alford made the score 3-3 when his sacrifice fly drove Grim home.

Alford gave up three runs, seven hits and five walks. He had five strikeouts before departing after five innings with the game tied.

Reliever Garrison Price surrendered the winning runs in the sixth. Tucker Pate, who went 3-for-4, drove in the eventual game winner with a single and the Beavers scored an insurance run when Norton knocked in a run with a sacrifice fly.