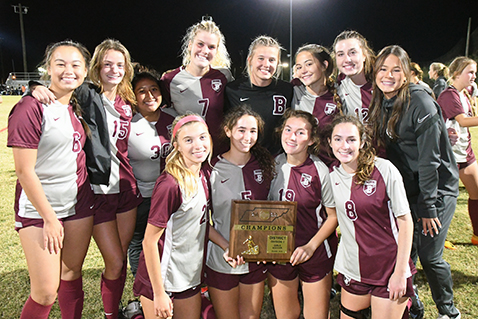 Lady Dogs’ coach Coach Ryan Radcliffe was pleased with his team’s improved play from their 2-1 semifinal win over Farragut on Tuesday.

“Great rebound from Tuesday night,” Radcliffe said. “We didn’t play well in that district semifinal. We played a real ugly game and  had to find a way to win. I thought it was a great rebound, focusing on us and our style. We wanted to make sure we were playing our best soccer and I thought we had moments of that tonight. “

“We definitely were out of sorts,” said Jessica Stephens, coach of the Lady Hawks. “We were not organized tonight. We struggled on things that we probably should have been a lot tighter on. We just did not play well. I think we were a little awestruck, given who they are and what they do. We gotta get our legs back under us and get ready for an elimination game on Tuesday.”

The Lady Bulldogs, the No. 1 team in the nation according to the website unitedsoccercoaches.org, got two goals in each half, and dominated time of possession. Of their 20 shots, 13 were on goal. Hardin Valley had but two shots for the entire match, one on goal.

Bearden took a 1-0 lead with 28:03 left in the first half when freshman Jayla Blue scored. The goal was assisted by her older sister, junior Nyla.

“We’ve been practicing working through the back,” said Jayla Blue. “We broke lines and we usually score on breaking lines. So my sister played me a great ball and I just was able to finish.”

With 10:49 left in the half, Alivia Stott gave the Lady Bulldogs a 2-0 lead on a penalty kick. Teammate Brinley Murphy was the recipient of the infraction.

Murphy, the Tennessee Gatorade Player of the Year, put the match long out of reach at the 20:59 mark of the second half when she scored her 31st goal of the season on a header, set up by a corner kick from Stott. It was Murphy’s 100th goal as a Lady Bulldog.

“Yesterday (against Farragut) we came out a little too cocky I feel like,” Murphy said. “Today we were ‘we’re gonna win every single ball.’ We just put everything out there today.”

“That’s really amazing,”  said Murphy – who is committed to play soccer for the University of South Carolina – of her 100th goal. “I never thought that was gonna happen. I always thought as a freshman I might get the record someday but I never knew if it was gonna come true. I’m so happy right now.”

Tomorrow night (Oct. 18) at home, Bearden will play Powell High School in the Regional round. The Lady Panthers lost to West 5-1 in the Region 3-AAA final Thursday night. Hardin Valley will play West on the road.

Last year Bearden went 23-0-1 and won the AAA state championship. The Lady Bulldogs will obviously be a strong contender to repeat.

“That would be amazing,” said Murphy. “That’s our goal. We’re not gonna leave here without doing that.”