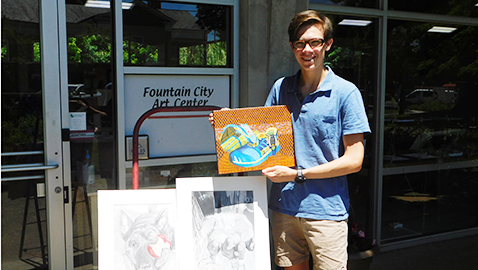 Academics, art and athletics all figured into the selection of Cian Bell as Central High School’s male Student-Athlete of the Year.

Acting was once a part of Cian’s life too, but there are so many hours in the day.

Bell was named a National Merit Commended Student and a National AP Scholar with Distinction. He scored a 5 on all six of his AP exams, 34 on the ACT and had a GPA of 4.46.

Not surprisingly, Cian (pronounced Key-in) was president of the National Honor Society at CHS and co-captain of the academic team.

In his senior year, Bell received a first place in oil painting at the 2019 National Art Honor Society Art show, which was held at the Fountain City Art Center.

He also earned first place in drawing at the 2017 and 2018 shows and had his art work put on display at the Knoxville Museum of Art Student Exhibition.

In athletics, Bell was captain of the school’s cross country team and also ran the 1600 and 3200-meter distance events in track.

“I got a late start running in high school and began my sophomore year,” he said. “I often thought I might have made it to the podium if I had started earlier.”

Cian still has a shot at being a late bloomer in distance running and plans to try out for the cross country team at Washington and Lee University in Lexington, Va., this fall. If he succeeds, he’ll continue in the distance events on the track.

In his senior season, Bell didn’t make it to state but qualified for the Sectionals in cross country and track. He finished in the Top 50 in the Region 2 Large Schools Cross Country meet at Victor Ashe Park last fall, and this spring was 12th in the KIL 3200 and 20th in Large Section 1 at Hardin Valley Academy with a time of 10:50.46.

Cian performed on stage at the Clarence Brown Theatre a couple of years when he was in middle school at Gresham and played the role of “the villain” in To Kill A Mockingbird at the Knoxville Children’s Theatre when he was a ninth grader at Central.

After taking up cross country and the time involved in that sport, he had to make a choice and made the decision to focus on visual arts instead of acting.

Bell is currently training for cross country in college. He put in his first 70-mile week last week.

“My goal is to put in 10 miles per day from here on out this summer,” he said.

Cian has been in touch with cross country coach Brandon Spalding at Washington and Lee. “Coach said there are no guarantees, but if I work hard this summer, I have a shot.”

Bell plans to major in physics.