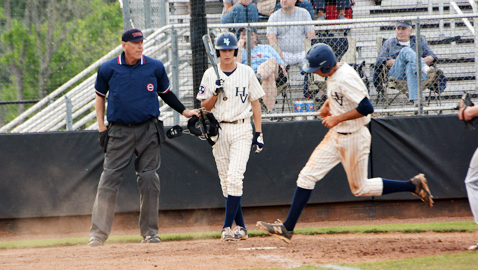 The Hawks scored five innings in both the third and sixth frames and those big offensive outbursts were enough to net HVA a 10-1 win over Heritage at home.

“I think the timing of the game for them was bad because we played bad in a 7-6 loss [at Maryville] last night, and after a bad night, we usually do a good job bouncing back and we did again,” Hawks coach Joe Michalski said. “I had a feeling that our guys would come in ready to play today.

“I had a feeling that we would be ready to go.”

Hardin Valley (21-7 overall, 8-5 in the district) would prove too much for the Mountaineers (13-13, 6-8) but Heritage failed to capitalize on some early scoring opportunities.

The Mountaineers had runners on in each of the first three innings but they were turned away when HVA starting pitcher Ryder Green made some timely pitches and was able to slam the door with the help of solid defense.

“I thought I threw pretty well,” Green said. “I had some walks but I had to pitch myself out of a couple of jams.

“I had to make pitches and let my defense do the work behind me.

The Mountaineers stranded a pair of runners in the top of the first. Heritage also left a runner at third base in the second and squandered a leadoff double by first baseman Jared McDonald in the third.

Green was masterful on the mound as he surrendered only one unearned run, four hits and two walks. He fanned six Heritage hitters in six innings before giving way to reliever Drew Parks, who yielded a hit and plunked a batter in a scoreless top of the seventh.

Green, however, was also a hero with the bat against Heritage.

He opened the scoring when he belted a two-run shot over the center field fence. He also had an infield single and stole a base. He scored twice and drew an intentional walk during HVA’s other big inning in the sixth.

In the third, Hardin Valley got RBI singles from Mason McCroskey and Dawson Byard. The Hawks also scored another run when Heritage starter Jordan Davis uncorked a wild pitch.

The Mountaineers managed to score an unearned run in the top of the fourth.

The Hawks had another five-run frame in the sixth; an inning that saw Heritage use three pitchers in Tate Phillips, Nick Walker and Tate Roberts.

All were greeted rudely by HVA, which tallied three times before the Mountaineers ever recorded an out.

Catcher Landen Beyer had an RBI double. McCroskey, Tyler Thompson and Parks each added scoring singles for the Hawks, who added another run on another wild pitch.

For Mountaineers coach Robbie Bennett, the story of Wednesday night’s district loss was an all too familiar narrative.

“We’ve got to keep working. We’ve got three games before the [district] tournament and anything can happen once you get there.”

Michalski felt fortunate to pick up the win.

“They’re really good and their hitters are scary,” he said. “Robbie does a great job with them.”