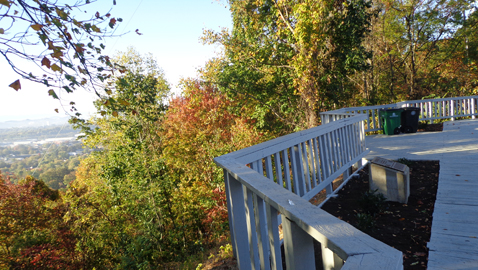 “We’ve adopted the park and once a month members do clean up there. We’re clearing out the underbrush to make the park more visible,” says Marilyn Childress, President of the Veterans Heritage Site Foundation.

The park will soon be known as “Sharps Ridge Veterans Memorial Park,” thanks to members of the group asking the Public Park Naming Committee recently to add “Veterans” to the name. The name change should be discussed at tomorrow’s city council meeting and much more than a name change is hoped for the high park that overlooks the city. The place is the only city park to be dedicated to veterans.

In the past Sharps Ridge has had a bad reputation. Isolated with only one way in and out, the remote urban park offers fantastic bird watching, hiking, and overlooks. But it also offered a rendezvous place for drug users and romantic encounters.

“The city’s been patrolling more and, in the last six months, there’s been a lot less drug paraphernalia found there,” she said.

The long narrow park starts at the top of Sharps Ridge and stretches to the western end where there’s a turnaround. Along the way there are a couple of picnic areas with a shelter and benches. The overlook gives a beautiful view of downtown and the Smoky Mountains beyond. There’re a few parking spaces along the park road, a few old monuments, and several signs about sponsors of trails and upkeep along with warning signs from the Knoxville Police Department including one about patrols there and another about not cruising the park.

A long range plan could include a huge Veterans Monument that could be seen from the city and “comparable to Mount Rushmore.”

Councilman Mark Campen, who represents the area, told The Focus the he plans to meet with the Foundation group and complimented their cleanup work at the park and their enthusiasm.

“There’s no doubt that the city will be behind it,” he said, adding that he hopes to also meet with the parks and recreation department and that adding “Veterans” to the city park name will expand the purpose of the park.