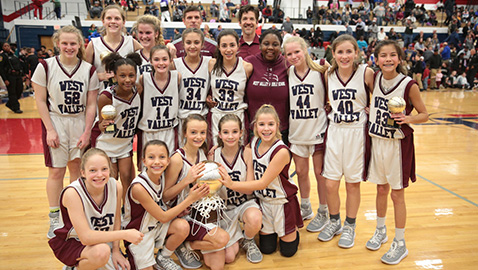 But it was perhaps the toughest test of the season.

“It was what I like to call a slop game,” West Valley coach Josh Ballard said after his squad notched a 42-27 victory over third-seeded Karns before a packed and spirited house as South-Doyle Middle School. “When I stay it’s a slop game, I mean that Karns is a good team and there’s a reason they went 13-2 in the [Knox County Middle School Basketball Conference] and finished tied for that second seed”

“They’re good and they play great defense.  They force you to take quick shots and they rebound.”

The Lady Beavers (19-3 overall) finished in a second-place tie with Halls but the Lady Demons captured the No. 2 seed by virtue of their regular-season win over Karns.”

The Lady Beavers were stingy out of the gate as they held West Valley to just five points during the opening six minutes. Trouble was, Karns managed just two points of its own in the first quarter.

But it was evident that the Lady Beavers came prepared to battle and they weren’t going to go quietly.

“I’m proud of my girls,” Karns coach Paige Ewing said. “We came out and we stuck to our game plan. The good thing is that we’re not done and we get to move on [to the East Tennessee Sectionals.”

The Lady Wolves, the Lady Beavers and Farragut Middle (which defeated Powell 46-28 in the third-place game on Thursday afternoon) all advance to the sectional tournament on Saturday, Jan. 26 at Hardin Valley Middle School.

Pairings and game times were not available at press time.

Karns more than held its own against West Valley early in the title tilt. The Lady Beavers were 11-10 when Judea Taylor buried a 3-point shot with 1 minute, 15 seconds remaining before halftime.

Avery Treadwell, West Valley’s eighth grade post player who was named the tournament’s Most Valuable Player, made a layup with 17.2 seconds left in the second stanza.

Karns kept her in check early as she scored just five points before halftime. But she would finish the contest with 15 points to lead all scorers.

Wilson, Murphy and Bishop all joined Treadwell on the all-tournament team along with Judea Taylor (who led the Lady Beavers with 10 points), Sammy Taylor and Javiana Pendergrass.

Murphy said that the Lady Wolves didn’t panic when they were embroiled in the defensive struggle that was the first half.

“We’re a family and when we get down, we play like a family,” she said. “We just have to do whatever it takes.”

“We just stick together like glue,” Treadwell said. “It’s not all just me. We even have people who don’t play [in games] who push us in practice and that’s why this team is so good.”

Ballard noted that he was pleased with the way his team responded after halftime.

“We came out in the second half and we started playing ball,” he said.