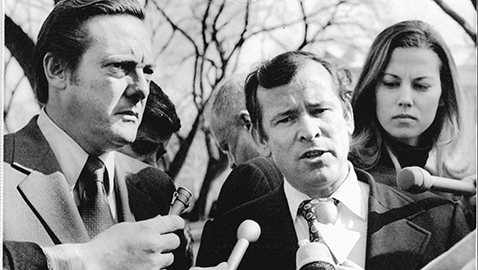 By Ray Hill
Congressmen Bill Brock and Jimmy Quillen, along with their newly elected colleague John Duncan, gave a dinner for Republican legislators after the 1964 election.  Howard Baker attended the dinner and was surprised when the legislators unanimously announced they wanted him to serve as Chairman of the Tennessee Republican Party.  Bill Brock spoke briefly, saying he was pleased Republicans had been able to make gains in Tennessee and felt the GOP would be “a force to be reckoned with during the coming legislative session.”

Dan Kuykendall, who had failed to defeat Senator Albert Gore, spoke to a gathering of Republicans that December.  Acknowledging there “weren’t quite enough of us” to bring about statewide victory, Kuykendall said the 1964 elections did show there was a “solid base for sound expansion” for Republican success in the future.  Speaking at the same meeting, Congressman Bill Brock told the Young Republicans the GOP would never be more than a footnote if young and talented people did not sacrifice and give back to the community by seeking public office.

Despite the loss of most of the Republican ticket and Barry Goldwater in Tennessee, Bill Brock believes that campaign ultimately helped the Volunteer State become a genuine two-party state.  Brock recalled 1964 “was the year when our organization became real, became coherent, confident and focused.”  “The balance of the decade saw the realization of those efforts,” Brock said.  Bill Brock remembers that time as “heady days.”

After enjoying the Christmas holidays with family and friends, Bill Brock returned to Washington where a fight between the old and new was raging.  Charles Halleck, a member of Congress since 1935, was being challenged for Minority Leader by Congressman Gerald Ford of Michigan.  Halleck had similarly ousted long-time Republican Joe Martin in 1959 following a disastrous election cycle in 1958.  Halleck had been the Republican leader following yet another disastrous election cycle as the GOP lost thirty-six seats and the Democrats enjoyed a two-thirds majority in the House of Representatives.  When queried about the contest between Halleck and Ford, Congressman Brock thought Ford had a “slight edge.”  Congressmen Jimmy Quillen and John Duncan had announced they would vote for Halleck while Brock remained officially uncommitted.  Brock’s estimation of the race for Minority Leader proved to be accurate; Gerald Ford defeated Charlie Halleck to become the Minority Leader, a post he would continue to hold until he replaced Spiro Agnew as Vice President of the United States in 1973.

Bill Brock would become increasingly more prominent in the U. S. House of Representatives and an important voice in the counsels of the Tennessee and national Republican Party.

Brock had once again defied the odds and was reelected to Congress in 1964, a year that was quite difficult for many Republicans.  Brock was the first modern Republican ever to win reelection from Tennessee’s Third Congressional District.  The Chattanooga congressman was also a rising star in the Republican Party.  Even before his election to Congress in 1962, Brock was deeply committed to revitalizing the Republican Party and making Tennessee a two-party state.

Brock traveled to Nashville for a Republican rally and dinner, bringing along Congressman Edward Derwinski of Illinois, who would be the primary speaker for the event.  Bill Brock predicted 1966 would be an even better year for Republicans in Tennessee and thought there was good reason to think the GOP might even elect a United States senator that year.

Congressman Bill Brock largely tended to his duties as a member of the House of Representatives and by the summer of 1965 politics was on the minds of many.  Brock’s colleague, Congressman Richard Fulton, a Nashville Democrat, spoke in Chattanooga.  Fulton’s talk was political and partisan in nature.  Congressman Fulton urged Democrats to defeat Brock in 1966.  “Next year you will have the opportunity to elect a man to Congress who understands the needs of the people,” Fulton told a crowd of Democrats.  Fulton said the aims of the Kennedy administration had been realized through the presidency of Lyndon Johnson “despite opposition from the other party.”  Another guest at the rally was a young attorney, John Jay Hooker, Jr., who was being touted as a candidate for governor in 1966.

Hooker was hardly the only candidate being urged to run for statewide office in Tennessee.  Bill Brock was being nudged by many Republicans to challenge Senator Ross Bass who had to run for a full six-year term after winning a special election to fill the remaining two years of the late Estes Kefauver’s term in 1964.  It was also a certainty that Governor Frank Clement intended to make yet another bid for the United States Senate.  Barred from running for reelection as governor in 1966, Clement had little choice but to challenge Ross Bass if he wished to remain in public life.  Bill Brock disclaimed any interest in running for the U. S. Senate in 1966 and Howard Baker, the GOP nominee against Bass in 1964, had yet to express any interest in a rematch.  Brock seemed like a good bet to many Republicans who wished to see a serious candidate oppose Senator Bass.

When Democrats in Congress made an effort to repeal part of the Taft – Hartley labor law, Bill Brock put them on notice it would be an issue in the 1966 campaigns.  Congressman Brock skirmished with Senator Ross Bass, who contended there were a goodly number of industrialists in Tennessee who favored repeal of Section 14-B of the Taft – Hartley law.  “The Senator is wrong,” Brock said.  “The mail that I have received and the comments that have been made to me by leading businessmen and workers throughout Tennessee indicates that they are for retaining Tennessee’s right-to-work law.”  Brock urged Bass to release a list of those businessmen who supposedly favored repeal of 14-B.  Bass had made the comment “the largest industrialists in my state are for the repeal of 14-B” during debate in the Senate.  “If such a list exists,” Brock mused, “it might strengthen Sen. Bass’ position.  On the other hand, if the largest industrialists in our state are not for repeal, Sen. Bass’ argument is fraudulent.”

Brock was one of the Republicans in Congress pushing a motion that would have prevented the United States from giving foreign aid to countries who “furnished strategic goods” to North Vietnam.  The motion only failed by 10 votes in the House, yet not a single Democrat in the Tennessee Congressional delegation voted for it.  “It is so unbelievable that members of Congress would permit our money to be used against our boys that I question whether or not the Tennessee Democrats fully understood their vote,” Brock lamented.  “If the Tennessee Democrats had voted with us on this crucial issue, the outcome would have been different and American financial, technical and military assistance would have been refused those countries who are supporting the Communists in North Vietnam with strategic goods.”

“Perhaps they will explain their position to the people back home in Tennessee and to the families all across the country who have sons, husbands, relatives and friends fighting in Vietnam,” Brock said.

Some newspapers in Tennessee decried what they perceived to be Bill Brock’s partisanship, but it made him popular with Republicans in his home state, as well as with some conservative Democrats.  Brock’s persistence in urging Ross Bass to explain his comment about businessmen in Tennessee supporting repeal of the 14-B provision of the Taft – Hartley Act forced the senator to finally confess he had misspoken.

Congressman Brock’s comments about student demonstrators protesting the Vietnam War didn’t sit well with Franklin Haney, a resident of Third Congressional District and president of Tennessee’s Young Democrats.  Haney pointed out the Young Democrats had condemned extremism on both the left and the right and noted said, “It is easy to condemn one group at a time as some would like to do but it is time that all such groups were driven out of our major political parties.”

Tennessee Democrats kept a close eye on Brock’s traveling in the state.  The Chattanooga congressman went to Jackson, Tennessee where he opened a new GOP headquarters, as well as speaking to a Rotary club and a rally for local Young Republicans.  There was increasing speculation Brock might run against Senator Ross Bass or perhaps for governor.  Brock stressed the responsibility of public service and predicted there would be two new GOP congressmen elected from Tennessee in 1966.

Candidacies began popping up all over the state and Howard Baker made it clear he intended to run for the United States Senate once again, but Ken Roberts, who had managed Barry Goldwater’s campaign in Tennessee, was seeking the GOP senatorial nomination as well.  Many Republicans, Bill Brock included, did not believe a primary campaign would divide the Tennessee GOP for the general election.  When asked about the possibility of his running for governor, Brock replied, “I have been asked to run by a number of people.  Obviously, you can’t ignore such a question, but at the present time I am planning to run for Congress.”

The Democrats were faced with their own heated primaries with Governor Frank Clement making a determined bid to replace Senator Ross Bass as the Democratic nominee.  Former governor Buford Ellington was running to return to the statehouse while being challenged by John Jay Hooker.  Brock was still the most prominent Republican mentioned to run for governor in the spring of 1966.  The Chattanooga congressman acknowledged he was thinking about it, but delayed any kind of announcement about his political future for several weeks.  Brock made it very clear he did not expect the GOP nomination for governor to be handed to him, insisting, “I will run for the nomination in the August primary if I run at all…I wouldn’t want the nomination on any other basis.”  Bill Brock was receiving support in some unexpected quarters for a gubernatorial race.  Some Democrats were fearful John Jay Hooker might beat Buford Ellington for the gubernatorial nomination and it became increasingly clear they preferred Bill Brock to John Jay Hooker.

Support for Brock was hardly confined to traditionally Republican East Tennessee; a rally was planned in West Tennessee specifically for the purpose of urging Bill Brock to run for governor.

It was certain that Bill Brock would face a Democratic opponent irrespective of what office he sought in 1966.