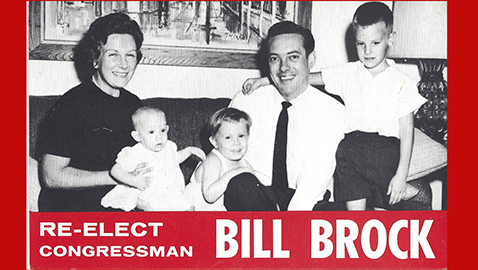 By Ray Hill
Bill Brock had yet to finish his first full year in Congress when he came to Knoxville to speak to a Young Republican leadership-training program. Brock had worked tirelessly to help build the Tennessee Republican Party and make Tennessee a genuine two-party state. Arizona Senator Barry Goldwater, seeking the Republican presidential nomination, had said he would sell the Tennessee Valley Authority, a notion that riled many Tennesseans, including Bill Brock. Congressman Brock flatly said while he was a strong supporter of free enterprise, he would strongly oppose any effort to sell TVA.

The death of Senator Estes Kefauver in August of 1963 meant both of Tennessee’s seats in the United States Senate would be up for election in 1964. Goldwater’s proposal to sell TVA would have serious repercussions for Tennessee Republicans. Bill Brock had been considered as a candidate for either one of the Senate seats, but had announced he would seek reelection to Congress. Tennessee Democrats felt they had a good chance of defeating Brock in 1964, but the young Congressman was well positioned to run again. When Congress considered a bill which would increase the pay of congressmen, Brock introduced a bill providing for “incentive” pay. Brock’s bill would tie Congressional salaries to the budget and government spending. The Brock bill would give congressmen a 1% pay raise for every billion dollars under the budget proposed by the president they appropriated. Conversely, for every billion dollars appropriated over and above what the president proposed, congressmen would receive a pay cut of 1%.

As the Democratic contenders began exploring the race for the late Estes Kefauver’s Senate seat, several Republicans began to sound out sentiment for a possible candidacy. Businessman Dan Kuykendall of Memphis was taking the pulse of fellow Republicans around the state by the end of the year with an eye on opposing Senator Albert Gore. Politics in Tennessee and nationally were further agitated by the brutal assassination of President John F. Kennedy in Dallas. Finally having achieved his ambition of becoming President of the United States, it was clear Lyndon Johnson would be a candidate to win the presidency in his own right. The country came together behind the new president, which caused Tennessean columnist Joe Hatcher to crow that boded ill for Republican fortunes in Tennessee. Proclaiming that Barry Goldwater’s star had set, Hatcher went on to speculate Senator Albert Gore would be reelected and the Democrats would win the late Estes Kefauver’s seat as well. Hatcher forecast that Bill Brock would be defeated in his reelection bid. “Certainly the chances of young Rep. Bill Brock of Chattanooga may have also flown out the window.” Hatcher believed Brock was preparing his reelection campaign to run against the Kennedy administration. Johnson, Hatcher thought, would be a much more difficult target for Republicans in Tennessee. Hatcher was not alone in his opinion; Ellis Binkley was the political columnist for the Kingsport Times and wrote, “Brock is in trouble as he seeks his second term.” Binkley said Congressman Jimmy Quillen might escape opposition in both the primary and general elections while Brock would certainly an opponent. Indeed, Binkley said the question was not whether Bill Brock would have an opponent, “but how many.”

As it did so frequently, death claimed yet another prominent Tennessean when Congressman Howard Baker died January 7 of an apparent heart attack while shaving. Active in Republican affairs for decades and having served in Congress since 1951, Baker’s passing was a shock. Baker died five days before his sixty-second birthday. Although there was some indication Congressman Baker had some resentment of the attention Bill Brock had won following his election to Congress, the young Chattanoogan was gracious. Brock expressed his own sorrow at Baker’s passing, calling the late Congressman a “friend and counselor.” Brock sadly noted Baker’s “dedication to the principles of this country, his warmth and respect for others and his love for the people of Tennessee are irreplaceable.” Brock quickly introduced a bill to name the Tennessee Valley Authority’s Bull Run steam plant near Knoxville for Howard Baker, Sr.

For one who was the author and architect of the “Great Society” LBJ came into office signaling a need for economy in government, an approach that had the strong support of Congressman Bill Brock. “President Johnson’s recognition of the urgent need for a reduction in inflation-producing deficits gives all Americans real hope for a meaningful tax reduction,” Brock said. “If Congress will react responsibly, enacting further economies where possible, the whole nation will be the beneficiary. I personally will do all I can to support this goal.” Even some Democrats were dubious about Johnson’s proposals. Senator John McClellan of Arkansas mused it would be “a miraculous achievement” if President Johnson were able to reduce expenditures while proposing new programs.

Despite being considered an endangered incumbent, Bill Brock still traveled throughout Tennessee on behalf of the Republican Party. Brock was tapped by his colleague Jimmy Quillen to be the keynote speaker at the Kingsport Lincoln Day Dinner in the spring of 1964. Both Brock and Quillen stood beside Irene Baker as she took the oath of office to succeed her late husband in Congress. That same spring, politics was far from Bill Brock’s mind when he and his wife Muffet welcomed the birth of their daughter, Laura. Already the parents of two boys, six-year old William IV and fifteen month old Oscar Handley, Congressman Brock could not hide his delight with the birth of a daughter. “We haven’t decided yet on a middle name,” Brock explained following Laura’s arrival.

By late April of 1964, two Democrats raced to announced their respective candidacies to oppose Congressman Bill Brock. State Representative William D. Leader managed to edge Robert Summitt by a few hours, although another contender, Jack Mayfield, had purchased billboards hailing his own candidacy for some weeks. Mayfield, a Hamilton county councilman and exterminator, claimed not to know who had paid for the billboards. The outdoor advertising agency who had erected the billboards adamantly refused to tell who had paid for them.

In a press conference announcing his candidacy, Leader condemned Brock as “ineffective and inept.” “He must be replaced with a representative who will represent all the citizens,” Leader said. Having served four years in the State House, Leader had won some recognition for having strongly opposing the administration of Governor Frank Clement in the last session of the legislature. An insurance man by profession and a graduate of Harvard University, William Leader might well suffer the same fate as Wilkes Thrasher in losing the support of Clement Democrats should he be the Democratic nominee for Congress. Robert Summitt had an equally interesting background, serving as the coroner for Hamilton County as well as an assistant county attorney. Summitt had also worked for the late Senator Estes Kefauver. Saying he would reveal his platform at a later date, Summitt proclaimed himself the “candidate of candor.”

Several other Democrats were eyeing the race including James “Bookie” Turner, a city councilman, and Wilkes Thrasher, Jr. was mulling the possibility of a rematch with Bill Brock. Congressman Brock, along with his colleagues Irene Baker and Jimmy Quillen, addressed the Tennessee Republican State Convention which endorsed the candidacy of Barry Goldwater for president and Dan Kuykendall to oppose Senator Albert Gore. Brock was one of the at-large delegates named to attend the Republican National Convention in San Francisco. Other at-large delegates included Congressman Jimmy Quillen, Louise Goff Reece, the widow of Congressman Carroll Reece, and Guy Smith, editor of the Knoxville Journal.

If Democrats thought Bill Brock would trim his conservative sails while running for reelection, they were much mistaken. Speaking before a Nashville Kiwanis club, Congressman Brock expressed his profound disagreement with Lyndon Johnson’s “War on Poverty.” Brock believed there was a different kind of poverty facing America, which included a poverty of “national leadership, national courage, national morality and integrity, national faith and national sense of purpose” which needed to be addressed. Brock said the Area Redevelopment Administration was rife with “incompetence and fraud.” Bill Brock said he was not in favor of taking the hard earned money of those who were self-reliant and independent to subsidize the “incompetence, lack of productivity and depravity” of certain violent slums in places like New York City. Noting the excessive violence of those areas where policemen were attacked and women killed while witnesses merely watched, Brock wondered, “What is happening to America?” Brock argued poverty should be addressed through education and opportunity. Congressman Brock lamented “we have made a concerted effort to get people hooked on handouts and it’s succeeded.” Brock’s speech caused the Tennessean to pitch an editorial fit. The Tennessean sniped the Congressman “is suffering from poverty of good judgment and human compassion.”

Bill Brock was in upper East Tennessee when his friend and colleague Congressman Robert Taft, Jr. of Ohio came to Johnson City to keynote an appreciation dinner for Jimmy Quillen. Son of the late U. S. senator and “Mr. Republican”, Bob Taft, Jr. excoriated Lyndon Johnson before what was estimated to be “the largest crowd ever to assemble for a ‘sit-down’ dinner” in the Republican stronghold.

Bill Brock formally announced his bid for a second term in Congress on June 1, 1964. Within weeks of Brock’s reelection announcement, “Bookie” Turner announced he was withdrawing from the Congressional race. Turner said he had only taken the plunge as a candidate “for the sake of party unity”, he promised to do all he could to help the Democratic nominee for Congress in the general election. Turner cautioned his fellow Democrats a divided party would only help Bill Brock in the fall campaign.

It was soon readily apparent the Democrats would not be united. Joe Hatcher was reporting in his column “Gov. Frank Clement and his machine ‘patronage’ boys in Chattanooga are throwing weight around in the Third District congressional primary – – – to the detriment of the Democrats and in favor of Republican W. E. (Bill) Brock’s reelection.” The Tennessean disliked Frank Clement almost as much as it disliked any Republican and rarely missed an opportunity to be critical of the governor and his administration. The fact Clement was a candidate for the United States Senate against Ross Bass was likely an added factor. The Clement administration aiding a Republican congressman’s reelection campaign would not make Democratic voters very happy. State Representative William Leader claimed the weight of the Clement administration was placed against him inside the Democratic congressional primary due to his opposition to the “high tax program” the governor had submitted to the legislature in 1963. Leader ignored the fact much of Clement’s increased expenditures were largely to benefit those individuals and special interest groups normally affiliated with the Democratic Party. Both Leader and Joe Hatcher flatly stated the Clement administration was supporting Robert Summitt for Congress inside the Democratic primary. Leader attempted to portray himself as a victim in a political drama most folks didn’t really care much about. “Because I vigorously fought the unneeded taxes in my legislative fight to protect the people who could least afford to pay these taxes, I am now confronted with the opposition of the machine,” Leader cried.