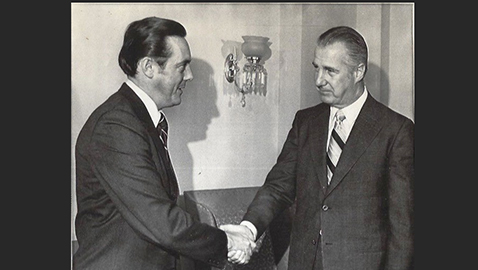 By Ray Hill
Franklin Haney was urged to run for Congress from the Third District when Tennessee Young Democrats adopted a resolution during a convention in Knoxville encouraging him to make the race. The twenty-six year-old Haney was receptive and announced his candidacy for Congress in May. Although young, Haney had worked for U. S., Senator Herbert “Hub” Walters and had campaigned for the late Senator Estes Kefauver, as well as Governor Frank Clement. In his announcement, Haney said, “As our own Estes Kefauver believed in the promotion of responsible change to benefit the individual, so my own political philosophy centers around one thing: the inherent worth of each individual.” Haney went on to say, “I want each man, woman and child to have an equal chance to develop his potentialities to the fullest, unhampered by the chains of poverty, lack of education or opportunity, and prejudice.” Haney was careful to say he did not categorize himself as either a liberal or a conservative. The young candidate said he stood for “a brave new spirit that does not take refuge in the clichés of old and ineffective ways.”

Franklin Haney’s eloquence did little to stop Bill Brock’s ascendancy as a rising star of the Tennessee Republican Party. Carroll Reece’s widow, Louise, designated Bill Brock as “the upcoming ‘Mr. Republican of Tennessee’”, but it was becoming increasingly clear the Chattanoogan would not run for governor. “I haven’t definitely made up my mind,” Brock told a gathering in Dyersburg, Tennessee, “but I will probably run for Congress.”

The question of Bill Brock running for governor came down to just who the Democrats would nominate. A race against former governor Buford Ellington seemed less plausible than a race against John Jay Hooker. Even some deeply partisan Democrats thought Brock had a good chance to become the first Republican governor of Tennessee since Alf Taylor’s election in 1920 should Hooker be the Democratic nominee.

By the middle of May, Bill Brock said he was “90 per cent sure” he would seek reelection to his seat in Congress. Republican polls indicated Ellington was running ahead of John Jay Hooker and that likely helped Brock make up his mind. On May 30, 1966 Bill Brock officially announced he was running for Congress once again. “I intend to run for Congress – – – period,” Brock said.

In spite of his youth, Franklin Haney was being taken seriously as a candidate for Congress. Senator Ross Bass came to Chattanooga to headline a $100 per-plate dinner to raise money for Haney’s congressional campaign. “We hope this young man will be able to unify and solidify the 3rd District Democrats,” Bass said. “We’re going to have to stand up and fight or else we’re going to become the minority party.”

Some Republicans had not given up on Brock running for governor and there was an effort to wage a write-in campaign for the nomination. Brock dismissed the idea, saying, “I don’t care how much Franklin tries to get me to run for governor. I’m a candidate for Congress, thank you.”

A campaign for governor dismissed, Congressman Bill Brock faced twenty-six year old Franklin Haney in the 1966 general election. The fact no more prominent Democrat decided to face off against Brock was something of an admission the Congressman had entrenched himself inside Tennessee’s Third Congressional district. Brock opened his campaign for reelection in Athens, Tennessee and said he was running again to “Continue building a better America for this generation and those to follow.” Brock dismissed Haney as an “LBJ parrot” who could “only repeat worn-out promises of this (Johnson) administration.” Congressman Brock bore down on the failures of Lyndon Johnson’s administration. “Despite a record of progress…we are today being told that America is so big, so complex that it is beyond the scope and capacity of the individual… No longer, we are told, are Americans capable of determining their own destiny,” Brock said. Inflation was then rampant, an issue which many congressional Republicans gnawed like a dog with a bone.

“Every housewife here knows how much the cost of bacon and potatoes and all necessities of life have gone up,” Brock cried. The Congressman said the Johnson administration was “blaming everyone but themselves.” Brock was also quick to remind his audience President Johnson and the overwhelmingly Democratic Congress had “consistently” failed “to live within its income… even in time of enormous prosperity.” According to Brock, Franklin Haney had said, “Inflation is not half as bad as it is made out to be.” The Congressman retorted, “I honestly do not agree.” Bill brock said while he did not personally challenge the patriotism of those folks in Washington who had removed “their ability to respond to the needs of local citizens…I challenge their lack of faith in the individual.”

Franklin Haney had opened his own campaign for Congress in Bradley County, decrying what he termed Congressman Brock’s opposition to those programs he believed helped the people of the Third Congressional district. Haney complained Brock had “hitched his political wagon to an ultra right-wing star.” Bill Brock was on hand, along with Congressmen Jimmy Quillen and John Duncan, when Howard Baker opened his formal campaign for the fall election in Nashville. Governor Frank Clement had narrowly defeated Senator Ross Bass for the Democratic nomination, reversing his own loss to Bass two years earlier. Clement would face Howard Baker in the general election.

Bill Brock had mailed 115,000 questionnaires throughout his district and the replies indicated his thinking was not much different than that of the people he represented in Congress. More than 85% of those responding felt Lyndon Johnson’s “War on Poverty” had been a failure; almost 91% of those responding said they had “felt the effects of an increase in the cost of living over the course of the past year.” Brock’s political skills had been apparent when he had protected his district when the legislature redistricted in 1965. According to the Nashville Tennessean, Brock had formed an alliance with Congressman Robert “Fats” Everett, a conservative West Tennessee Democrat. The Tennessean fretted that “Brock has moved since his election in 1962 ‘to assume the dominant position that the late B. Carroll Reece enjoyed in state Republican politics.” Brock had outmaneuvered liberals who wished to diminish his hold on the Third District by placing heavily Democratic counties inside his district; instead, Brock managed to add Loudon County to his Congressional district, which was largely Republican. Fats Everett had been profoundly concerned that he and fellow Congressman Tom Murray would be thrown together inside the same district. Murray was bitterly detested by not only the Tennessean, but also many liberal Democrats who believed he was a Republican masquerading as a Democrat. Redistricting did manage to injure Tom Murray, who very narrowly lost the Democratic nomination to an up and coming young Democrat named Ray Blanton.

While Franklin Haney raced around the Third District, Brock tended to his Congressional duties, as Congress was still in session during the beginning of the general election campaign. Brock brushed aside Haney’s constant stream of criticism, simply saying, “My opponent proposes to endorse LBJ’s ‘Great Society’ and all its big spending programs. I propose to show the disastrous results of such political expediency.”

The Jackson Sun thought Haney’s campaign had caught on and described the race as “the most aggressive campaign yet faced by Representative William E. Brock III…” A buoyant Haney appeared in Knoxville to speak to University of Tennessee students and proclaimed, “We are winning because we are willing to discuss the issues frankly and openly and come before the people with our programs and the truth.”

As the general election approached, the Tennessean ruefully predicted Bill Brock was likely to be easily reelected. The prediction was accurate, as Brock defeated Haney 71,005 to 59,027. Howard Baker defeated Frank Clement decisively in the race for the United States Senate and Republicans picked up another Congressional seat in West Tennessee when Dan Kuykendall beat incumbent George Grider. Kuykendall had run a campaign against the Johnson administration and the Great Society, which Grider had defended. Republicans made gains all across the country and Bill Brock said the election results were “a significant repudiation of President Johnson and his programs.” The GOP also made notable gains in the Tennessee legislature, increasing its membership from 25 to 40, just 10 short of a majority.

Bill Brock, along with his colleagues Jimmy Quillen, John Duncan, and Dan Kuykendall, all attended a special reception for Tennesseans as Howard Baker prepared to take the oath of office as the first Republican to be popularly elected to the United States Senate from Tennessee after the New Year. It was yet another sign that the Republican Party in Tennessee was growing. Along with most of Tennessee’s Congressional delegation and three former governors, Bill Brock was invited to attend the inauguration of Buford Ellington, who took the oath of office as governor of Tennessee for the second time in January of 1967. Brock’s first act in the new Congress was to propose a select committee to govern the conduct of House members.

Brock faced off with fellow congressman Richard Fulton at a special seminar in Nashville, combining an audience of students from Vanderbilt and Fisk universities, sponsored by the Taft Institute. Fulton was even more liberal than Brock was conservative and the students received a lively evening of discourse on practical politics from differing points of view.

When 26-year-old Mary Hellen Battle of Oak Ridge came to Washington, D.C. after having been held for fourteen months in an East German prison to attend a reception in her honor in the offices of Congressman John Duncan, Bill Brock was on hand to greet her. Battle’s crime was allegedly attempting to held an East German escape to freedom from communist rule. “The trial was a mere formality,” Battle said. “They already had the sentence worked out. I had no real chance to talk to my lawyer, except about technicalities — whether I had enough clean clothes. However they did want my sentence to be 5 ½ years, and it was cut down to four.” Mary Hellen Battle had attended Vanderbilt University for two years and found herself charged by East German authorities with being a Central Intelligence Agency operative. At the time of her arrest, Battle was studying theology and teaching in a local high school. When teased that she might run for Congress, Battle drily replied, “Not yet. I got mixed up in politics. Unsuccessfully.”

Brock continued his efforts to grow the Tennessee Republican Party, constantly encouraging young people to run for office. Speaking in Nashville, Brock predicted the Republican nominee “whoever he is” would carry Tennessee “handily – – – by 100,000 votes.” The Congressman also predicted the Republicans would make substantial gains in the Tennessee legislature irrespective of how reapportionment went. “My own 3rd district is a prime example,” Brock said. “We’ve been gerrymandered for 100 years, with more and more Republicans crowded together over in East Tennessee.”

As early as 1967, speculation about Bill Brock’s future was a hot topic of conversation amongst political prognosticators. Ellis Binkley, who covered politics for the Kingsport Times wrote that Brock was more likely to challenge Senator Albert Gore in 1970 rather than run for governor when incumbent Buford Ellington would be ineligible to seek reelection.

Joe Hatcher, political reporter for The Tennessean, was already forecasting congressman Bill Brock was in trouble following the legislature’s redistricting. Hatcher believed Brock had flourished inside Tennessee’s Third Congressional district due to the ranks of Democrats being “broken” and facing “weak candidates.” Hatcher opined the obvious, that Brock must win reelection in 1968 if he was to be a serious candidate for either governor or the U. S. Senate in 1970.