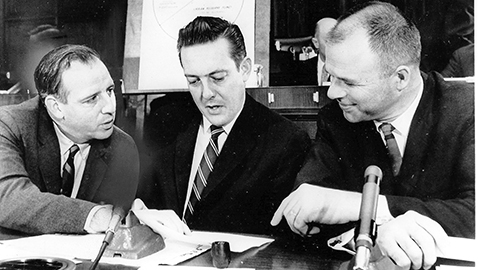 Thirty-two year old William E. Brock, III had managed the impossible, winning Tennessee’s Third Congressional district in 1962.  It was the first time the Third District had elected a Republican congressman since 1920.  Brock was one of three Republicans in the Tennessee Congressional delegation, joining Howard Baker, Sr. and Jimmy Quillen, who had just been elected to Congress from the First District.

Elated Republicans quickly assembled for a special victory dinner in Knoxville to honor the three congressmen in December of 1962.  Congressman Baker told fellow Republicans 1964 should bring even greater results.  “Two years from now we should be celebrating the election of five congressmen, 50 members to the General Assembly and a Republican president,” Baker said.  “John Fitzgerald Kennedy is a one-term president.”

As Bill Brock prepared to take the oath of office, he spoke before the Hamilton County Republican Women’s Club and outlined his philosophy.  Brock believed “the basic hope of this country is in people reasserting their rights to run their own affairs.”  Brock also sounded a theme that would remain a hallmark of his public life.  Bill Brock strongly believed it is “of vital importance that people of all levels play a part in our government.”  The new Congressman-Elect felt the biggest threat to America was “not from the outside from some little character like Castro – – – but from our citizens’ not being involved in their day-to-day lives that they don’t pay enough attention to the way our government is mismanaged.”

The Republican leadership in the U. S. House of Representatives clearly realized Bill Brock’s potential, as the freshman had asked for a seat on the powerful Appropriations Committee or the Banking and Currency Committee.   Brock later recalled his assignment to the House Banking and Currency Committee “were all that complimentary.”  The Chairman of the Banking and Currency Committee was Wright Patman, a fire-breathing populist who Brock remembered was hell-bent on destroying “the Federal Reserve system.”  Patman had first been elected to Congress in 1928 and Bill Brock still remembers to this day how the crusty Texan would open every meeting of his committee “with a 15 to 20 minute diatribe, which usually contained some comment to the fact that in this great country people who needed money should be allowed to get it and not have to pay interest rates.”  Naturally, most Republicans were tired of Patman’s showmanship and demagoguery and Brock believed he was put on the committee precisely because he was a freshman legislator.  Both Brock’s freshman status and his regular attendance of hearings less populated by other congressmen turned out to be a blessing.  During Brock’s first two years in Congress, Wright Patman chose to hold hearings requiring the testimony of “major financial figures”, including the Chairman of the Federal Reserve Board, William McChesney Martin.  Not infrequently, Bill Brock was the only Republican present and used the opportunity to learn as much as he could.  Brock’s knowledge of the country’s financial workings impressed his colleagues.

Congressman Brock would receive special consideration from the GOP leadership.  From the very beginning, Bill Brock participated in the proceedings of the House and when President Kennedy spoke before Congress, the Tennessean described JFK’s talk as “a magnificent speech”, but noted it “seemed to have too many contradictions.”  The young Congressman explained President Kennedy “talked about a reduction in taxation without giving specific proposals for a reduction in spending.”  Brock’s statement was thoughtful and measured, especially when compared to that of his colleague Jimmy Quillen from the heavily Republican First District.  Quillen’s assessment of President Kennedy’s speech was, “New England’s breeze has caught the sail of the ship of state with a gust of hot air that threatens the turn of our country’s future.”

Although Bill Brock did not represent a district that was as solidly Republican as that of Jimmy Quillen, the young congressman could be a sharp partisan and was fearless in taking on the powers that be.  When Senator Albert Gore opposed the appointment of Judge William E. Miller to the Sixth Circuit Court of Appeals because Miller was a Republican, Congressman Brock took the “Old Gray Fox” to task.  “I’m surprised at Senator Gore’s blatant attempt to make our federal judiciary a patronage plum for politicians,” Brock thundered.  “The citizens of Tennessee have a right to expect fair, impartial and adequate justice when they approach the bench.”  Brock scolded Gore, saying, “The judiciary must remain independent, above party politics, and must never become a place to reward political supporters.  It is unfortunate that the senator has called for the appointment of any Kennedy Democrat, apparently regardless of qualifications.”  Gore’s own partisanship was highlighted when Congressman Ross Bass, a Democrat, warmly endorsed Judge Miller to Attorney General Robert F. Kennedy, telling the President’s brother Miller “definitely merits the promotion.”  Gore had another candidate in mind, backing attorney Harry Phillips for the judgeship, which was interpreted as a gesture toward fence mending with a faction of Tennessee Democrats in anticipation of his coming 1964 reelection campaign.  Joe Hatcher, the veteran political columnist for the Nashville Tennessean, which strongly supported Gore, noted the senator’s dilemma.  While attempting to please Democrats, Gore was arousing the ire of Republicans who appeared ready to make the first serious challenge to his continued tenure in the United States Senate.  Congressman Bill Brock was already being mentioned as an opponent to Albert Gore.  Senator Gore also had to worry about facing a challenge inside his own party from conservative former governor Buford Ellington.

Brock admitted he was “fascinated and frustrated” by serving in Congress.  The young Congressman and his wife Laura (called “Muffet” by everyone who knew her) were the parents of five-year old William E Brock, IV and three month old Oscar Handley Brock.  Bill Brock frankly confessed he liked serving in Congress and speculated he might well run for the United States Senate one day.  While working hard at being a congressman, Brock said he was still “learning the ropes” and concentrating on helping to advance the Republican Party in Tennessee.  Bill Brock was determined that Tennessee would become a legitimate two party state.  Brock confidently predicted that more Republicans would be elected to state and local offices in Tennessee.  “The statewide Republican party in Tennessee today is easily twice as effective as it was two years ago,” Brock said.  The Congressman said it was important people have “a choice in all statewide races in the future.”  Brock said the GOP had failed in the past, noting, the Tennessee Republican party had “failed to meet our responsibility to give the people an alternative in state races.”  Brock said merely placing a name on a ballot was not enough. Bill Brock emphasized, “We’re going to run to win.”

Yet again, Brock disputed his public image as a mindless conservative.  Congressman Brock readily admitted he was a conservative but believed it was important for a candidate to “stand for something.”  Brock said he didn’t want to come to Washington “just to oppose per se; I came up here to try to work to maintain the rights of the individual to make his own decisions in this country.”  Brock was serious about budget cutting and horrified many conservatives when he said, “There is no field that can’t be cut.  Defense is wide open.  We seem to have gotten the idea in this country that the military is holy.  It’s not.”  Bill Brock was not merely mouthing platitudes; when the House of Representatives approved a $16 billion authorization bill for the military, only 33 members voted against it.  Congressman Brock was one of the 33 who had the courage to oppose it.  Brock also questioned the $30 billion allocated for the space program and its goal of landing a man on the moon.  Brock wondered, “If we used the $30 billion that program will cost for education we could enhance the character of this nation over the next ten years.”  A reporter noted while Bill Brock was “friendly and easy going”, the young Congressman was not a typical “glad-handling, back-slapping type of politician.”  One of Brock supporters had lamented the lack of those traits in the candidate during the 1962 Congressional campaign, moaning “we’d have to kick him in the seat of the pants and say, ‘Shake hands’.”

Bill Brock was also quickly attracting considerable attention, especially for a freshman congressman.  The Tennessean was invited to be the keynote speaker for the Virginia Young Republican Federation’s convention.

Although a freshman in the House of Representatives, Bill Brock shrewdly used those opportunities available to him to jab the Kennedy administration.  When the White House announced 10,000 students would receive government jobs for the summer, Congressman Bill Brock pointed out the Kennedy administration had entirely bypassed the civil service system.  Brock noted the jobs had been “transferred from civil service to the White House, which will directly place sons and daughters of deserving Kennedy Democrats in these summer jobs.”  Nor was Brock shy about publicly citing the rough tactics used by the Kennedy administration to get its way.  Speaking before a Chattanooga civic club, Brock told his audience, “Several congressmen have received almost direct threats that their states would lose certain military installations if the congressman does not support the administration.”

Bill Brock was one of seventy Tennessee Republican leaders who met in Nashville in March of 1963 to discuss the possibility of challenging Senator Albert Gore the following year.  Hobart Atkins, who was a veteran of Tennessee’s State Senate and had been the GOP nominee against Gore in 1952, told his fellow Republicans, “Gore can be beaten, in fact, he has beaten himself.  All we need is a candidate and we can get one.”

Brock remained a serious contender against Senator Gore and while determined to help build a Republican organization in Tennessee, the Congressman traveled across the state.  Brock was the featured speaker at a fundraising dinner at Nashville’s Hermitage Hotel.  The Chattanooga congressman explored the theme of “no more Gore in ‘64” for Republicans paying $25 per plate at the dinner.  Brock gleefully told his fellow Republicans, “I think we should close this rally with a suitable rallying cry.  King John and Prince Albert must go in ’64.”  Still, Brock was cautious when asked if he would oppose the senator in 1964.  “Well, the only thing I can say is that we have more than enough capable prospective candidates who could win in ’64.”

In less than three months, Brock had traveled more than 10,000 miles to speak to Tennesseans.  Albert Gore was already looking over his shoulder and had toured Tennessee and had already made more talks throughout the state than he had during the first six years while in the U. S. Senate.

The Nashville Tennessean, a strongly liberal and Democratic newspaper, was alarmed enough by the prospect of Bill Brock challenging Senator Gore that it attacked the Congressman in an editorial following his speech in Davidson County.  Scorning the notion that Brock represented a new modern Republican party, the Tennessean charged the Congressman offered nothing but “the same tattered old rags of Republicanism that went out of style more than 50 years ago.”  Clearly, the Tennessean believed Bill Brock represented a threat to Senator Albert Gore.

Gore had praised Kennedy’s handling of the Cuban missile crisis and told a gathering of Democrats the issue would ensure the President’s reelection.  Gore gushed it was “an example of leadership supported overwhelmingly, if not unanimously by our people.”  Bill Brock disagreed, saying, “It is pretty frightening to most of us that the President took a stand, then backed down, and then took another stand and then backed down again.”  Congressman Brock told a gathering of Republican women it was sad that “we now blockade the exiles and freedom fighters instead of Castro.”

Despite being a freshman congressman, Bill Brock was slowly becoming an important figure in Tennessee.