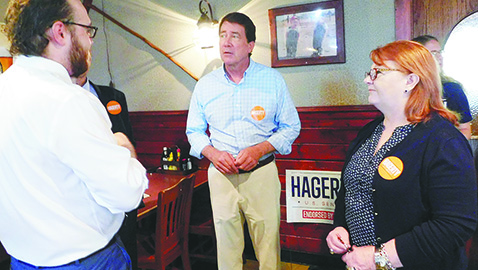 Hagerty shook a few hands and had a few brief conversations before addressing supporters at a midmorning gathering.

Hagerty laid out his platforms and his unabashed conservative views on the economy, freedom of speech and support for the country’s armed forces and law enforcement.

He said he feels that the country is under assault from China, the radical sect of Black Lives Matter and the Democratic Party. He also trumpeted several times that he is the only candidate fully endorsed by Donald Trump.

“I’m very concerned about the state of our country,” said Hagerty who is a member of the president’s White House Economic Recovery Task Force. “My family, my wife and four kids, we all uprooted and the reason that I’m running for the senate is to make sure that my kids and your kids and grandkids have the same opportunity that we had.

“When I grew up, we didn’t have much. My mother was a teacher and my father worked in construction. My father didn’t go to college but he worked hard to make sure that I had the chance to go.”

Hagerty also voiced his support for the military and law enforcement.

“I will always support our military and law enforcement,” he said. “You have Marxists in Black Lives Matter and they’re trying to fundamentally change the country and they attack our officers. They’re tearing down our statues and they’re burning our flag.”

He also blamed the left for the movement to defund police departments.

“There’s even a proposal in Virginia that is considering making an attack on a police officer a misdemeanor,” Hagerty said. “The Democrats want to defund police forces. They want to support anarchy. But I will stand behind our military and I will stand behind law enforcement because the only thing protecting us from looters and anarchy is our officers. My wife’s brother is a police officer and he puts on that uniform every day and he doesn’t know if he’s going to come home. The Democrat Party is unrecognizable from what it was 30 years ago.”

Hagerty is a businessman and he’s served as ambassador to Japan. He said that China has been aggressive in working against the United States and the Free World.

“As ambassador to Japan, I dealt with China every day and they are aggressive in the region. In Japan, we have a higher military presence than anywhere except the United States. And that’s because you have Russia, North Korea and China all right there,” he said.

“I first campaigned for President Trump in 2016 because he had plans to stand up to China. And he has stood up to China, and that’s something that other administrations, both Republican and Democrat, didn’t do. I campaigned for him when he was Candidate Trump and I want to go to the senate so that I can partner with him again. We need to hit China where it hurts, and that’s economically. We need to bring our businesses and our jobs back over here.”

On the issue of freedom of speech, Hagerty said that Google, Facebook and Twitter now have employees in their companies who are taking down posts supporting the president and he also discussed the recent op-ed piece written by Senator Tom Cotton (R-Arkansas) in the New York Times, that implored Trump to send in the military to quell the rioting and protesting.

“You also have employees from Google, Twitter and Facebook deleting pro-Trump posts. I’m concerned about freedom of speech and these things are right out of the Communist playbook.”