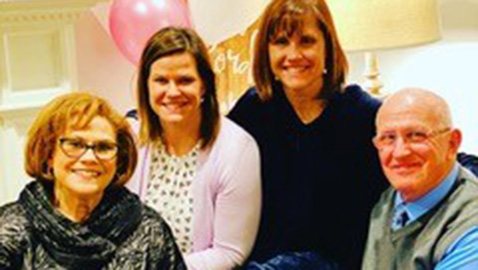 Won-loss records don’t always tell the whole story when it comes to the impact a high school football coach has on his players, program and community.

Bill Young was a good example of that at Bearden.

Young had compiled an overall record of 98-94 in two stints (1977-80 and 1988-2001) with the Bulldogs, yet six years later, after ending his long coaching career at Christian Academy of Knoxville, Bearden High named its football field after him.

“Why me?” even ran through Bill’s mind when he heard the news.

Last week, a former player of Young’s, who was among those instrumental in making that recognition happen in 2007, answered that question.

Brad Taylor was head coach at BHS in 2007 and three assistants on his staff that also had played for Young – Randall Scott (Class of 1978), Brian Tanner (Class of 1993) and Hunter Fendley (Class of 1994) – felt it was time for their former coach to be so honored.

“I think the world of Coach Young,” said Taylor, also a member of the Class of 1994. “He still is very special to us. I don’t know of a better man in football than Bill Young; just the type of person he is and his example played a huge role in me wanting to be a football coach.

“After his last year to coach at CAK, me and the others were excited to get it done. Lynn Hill was the athletic director and became interim principal that year. He played a huge role in getting the wheels turning and making sure all the things were taken care of with Knox County Schools to make it official.”

Ralph Reynolds, Young’s late brother-in-law, also was instrumental in the process, said Taylor. At the time, Reynolds was a Wellness teacher at Bearden who took care of a lot of the administrative duties for the football program.

Taylor, who now is the head coach at Karns High, felt there was no better representative for the title – Bill Young Football Field.

“Coach Young is the type of person you want to be around your kids and to help mold your kids. You’re not going to find a better person.”

During his coaching career, seven different high schools were blessed to have him

But the odd thing about it was Young never had any intention of being a coach. Fortunately, that would change.

Young was an all-round athlete himself at old South High in the early to mid-1960s. He was an All-East Tennessee selection in football, playing quarterback and free safety for Coach Vic Taylor, who he said was a great influence on him and his coaching career. Taylor would later become Athletic Director for Knoxville city schools and then AD at Catholic High when it was located on Magnolia Avenue in East Knoxville.

Young made All-State in basketball under Coach Marshall Bible, who guided the Rockets to fourth place in the TSSAA state tournament Bill’s junior season in the days before classification and integration.

They didn’t select all-star teams in baseball in that era, but Young was a versatile player for South, primarily used as a pitcher, catcher or centerfielder.

His overall athletic skills were showcased too when he won the state decathlon in Nashville as a senior.

The 1965 South High graduate was signed by the University of Tennessee, where he played basketball and football his first two years before focusing solely on football.

He said his role for Ray Mears’ basketball team was being a backup for 7-foot, 280-pound center Tom Boerwinkle, who went on to play for the Chicago Bulls in the NBA.

“Our size dropped off considerably when I went in,” said Young, who was 6-3, 205. “But we had played the 1-3-1 zone in high school and that’s what Mears used, so I had experience playing in that middle position.”

Young was on that 1967 SEC championship team too that had Ron Widby and wrapped up the title with a three-overtime win over Mississippi State in Starkville.

Young was captain and the starting free safety as a senior for Coach Doug Dickey’s football Vols, who were SEC champions in 1969.

Bill married married Janet Guthrie on Valentine’s Day 1970. She had been a majorette at – of all places – Bearden High in the 1960s and then at the University of Tennessee.

After graduating from UT that spring, Young signed a free agent contract with the Miami Dolphins but said he found out quickly in preseason camp that summer that he didn’t have the speed it took and the Dolphins had drafted two or three standout DBs as well.

Before leaving and returning to Knoxville, Young had to turn in his playbook and was directed to meet with Head Coach Don Shula, who was in his first season at Miami.

“Coach Shula was very nice and having known my background, he asked me if I had ever given thought to teaching and coaching,” recalled Young. “I told him I really wasn’t interested. Never even thought about it.”

Later that summer, however, Young, who had majored in Industrial Management, did accept former UT teammate Derrick Weatherford’s offer to join him on his staff as an assistant that fall at LaFollette High in Campbell County.

In addition to assisting in football, Young was head coach in basketball and baseball plus taught five classes.

“I was kind of in over my head,” he recalled, “but it was interesting.”

Weatherford left after that first year, and Young became head coach in football in addition to the other two sports.

He left after his second year at LaFollette and became an assistant football coach at Seminole High in Sanford, Fla. But after three games, the head coach was fired and Young found himself in the head post again. That season also was marred by one of the Seminole players suffering a broken neck in a game. Young made the decision at the semester break to return home.

He was washing UPS trucks when Bobby Gratz came to offer him a position as assistant coach at Bearden for the 1973 season. That would be the first of three stints in all at the West Knoxville school.

It turned out; however, David Sexton had already accepted the position. “But the next day when David found out I was interested in it, he told Bob Neff (athletic director) he would like for me to have it,” said Bill.

Looking back, Young called that “the most pivotal time” in his coaching career.

“Coaching at South turned out to be a great experience for me and my family,” he said. “I had really two good years there and it put a good taste in my mouth about coaching.”

South closed after the 1975 school year and merged with Young High to form the new South-Young High School.

Knox County hired John Clabo, who had been coach at Young, for the head coaching position at South-Young because he had the most experience. Coach Young said he understood and had no problem with that decision.

Knox County Schools gave Young the option to assist at South-Young or take the head coaching position at West High. Young chose to go to West. He would only be there for one year though, as the Bearden head job became available in 1977 and he took it.

After four seasons coaching the Bulldogs, the Oak Ridge position came open. Emory Hale had resigned at OR and taken the Austin-Peay State University job after leading the Wildcats to back-to-back state titles in 1979 and 1980.

At first Young felt he would be crazy to take the Oak Ridge job. He could only maintain the program’s success or go down. But the lure of one of the state’s top programs eventually changed his mind and he headed to the Atomic City.

Young coached the Wildcats through the 1987 season and then felt he “needed a change.” He resigned at Oak Ridge and the Bearden post came open that next season, opening the door for Young to return for a final 14-year run with the Bulldogs.

After retiring from the Knox County school system, Young finished his 35-year head coaching career with five seasons at Christian Academy of Knoxville (2002-06).

During his time at CAK, he captured his 200th career win.

“They beat us awful,” said Young. “But their coach, Gary Rankin, gave me the game ball. I had already mentioned that I would be stepping down at the end of the season.

“I remember play was stopped and Coach Rankin came out on the field to present me with the ball. I thought it was a classy move on his part.”

Young, a math teacher who has taught Algebra 2 and Geometry, continued to teach at CAK until this year. He’s teaching at Knoxville Christian School this year and it marks his 50th year in education.

In addition to winning 200-plus games, his coaching highlights include leading Bearden to the state quarterfinals in Class 5A in 1995 before falling 17-6 to Murfreesboro Riverdale and guiding CAK to the state semifinals in Class 1A before losing to eventual state champion Boyd Buchanan in 2003.

“The big thing was to try to help them,” he said. “You want them to come out being better people and realize hard work and all that you have to do to be successful is extremely important. In everything you do, you can learn life lessons no matter what your success is.

“I figured up not too long ago I probably have had over 4,000 students in class and over 2,000 athletes that I had coached and been involved with over the years.”

For a high school coach and math teacher, those also are impressive numbers.