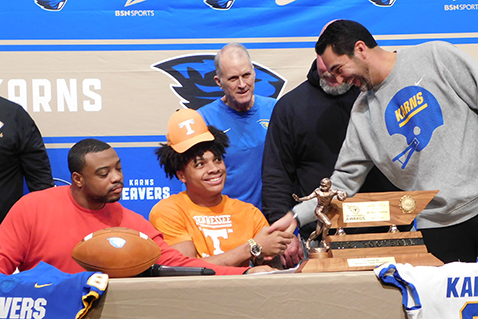 Bishop ends up at Tennessee after all

“All the hard work has paid off,” said the Karns running back who ranks as the TSSAA’s No. 2 all-time leading rusher. “It’s what I’ve dreamed of since I was a freshman.”

The 5-10, 194-pound Bishop, a two-time Class 5A Mr. Football honoree, picked the Vols over Appalachian State, after reopening his recruitment Dec. 6. He had been committed to Coastal Carolina University until Jamey Chadwell left CCU to take the Liberty University head coaching post on Dec. 4.

Karns Head Coach Brad Taylor began the ceremony by welcoming a small crowd at the school’s auditorium and said Bishop had been “a huge part of our program the last four years.”

De’Sean thanked his teammates for their support and then began to reveal his choice by taking off the red jacket he was wearing. Underneath it was a solid black T-shirt, but Tennessee orange could be seen poking out at the end of the short sleeves. The mystery was pretty much over then and to the delight of many in attendance.

Bishop finalized it by removing the black T-shirt. That left him wearing an orange Tennessee Volunteer T-shirt and he put on a Tennessee cap.

Bishop again kept his announcement a secret. And as before when he committed last spring to Coastal Carolina, he even kept his mom in the dark.

“Oh yeah for sure, I had to,” he said. “A lot of people were just chipping at me to see where I was going to go. It had to be a big surprise for everybody.”

“I did not know,” said his mom, Sherika Huff. “He kept me in the dark again. But I’m very proud of him and I’m proud of his decision.

“His future holds so many blessings and he’s going to be great at the Vols. I’m very happy; my family is happy and we’re just proud of him.”

De’Sean said deciding on the Vols developed “as the bond got closer and tighter and going to their games.” He was at Neyland Stadium the day UT beat Alabama this season too – one of the greatest wins in the program’s history.

Bishop, who will be an early enrollee, said he told the Tennessee staff his decision the day before his announcement. “They were pumped up” after hearing about it.

When De’Sean was asked what he looked forward to the most about playing for Tennessee, he said “the environment” right off the bat.

What if Chadwell hadn’t left Coastal Carolina? Would Bishop have signed with Coastal he was asked.

“I don’t know,” he said. “I probably couldn’t answer that. I mean a lot of stuff has happened since he left and I decommitted. Who knows?”

Bishop ended up circling back to answer the question.

“I guess it’s God’s process,” he said. “God talking to me and guiding me to whichever way He wanted me to go. I guess this is where He wants me to be at.”

Randall Scott, a veteran assistant offensive line coach at Karns the past four seasons, was asked after the ceremony what stuck out to him about Bishop as a player.

“De’Sean always played hard whether it was a practice or a game,” he said. “I’ve coached over 30 years and he’s the best running back I’ve ever seen. Never one to come out. Always wanted the football and was always ready to compete at the highest level.

“The offensive linemen wanted to run block for him,” Coach Scott added. “They wanted the ball in his hands because they knew if they got the front blocked, he’s probably gone for a touchdown.”

Coach Taylor summed up by saying, “UT Coach Josh Huepel has always been a big fan of De’Sean’s and really likes what he can do. He really thinks De’Sean has a good opportunity of being successful at Tennessee.”