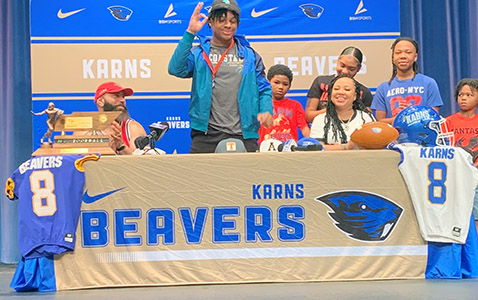 De’Sean Bishop is not just good in football. He’s good at keeping a secret.

Minutes before announcing his commitment Thursday, his mother didn’t know which college the Karns High running back had picked.

“He wouldn’t even tell me,” said Sherika Huff, laughing. “He made me so mad.”

Bishop, the nation’s leading rusher and TSSAA’s 2021 Class 5A Mr. Football, chose Coastal Carolina as his future college home. When the time came to reveal his decision in the KHS auditorium, he stood up and put on a CCU cap and showed its school colors of teal, bronze and black.

The Sun Belt Conference member is located in Conway, S.C., nine miles from Myrtle Beach. CCU’s nickname is the Chanticleers and their mascot is a proud and fierce rooster.

“Coastal Carolina came on late but they recruited me hard,” said Bishop. “I felt like that was the school that wanted me the most.”

De’Sean said he made the decision “probably a week ago.”

When asked why he hadn’t told his mother, he said: “I wanted it to be a surprise. Yell, she was begging me to tell her.”

The No. 1 factor that led to his decision was “how good the people are,” he said. “They’re amazing people and they are going to push you to be the best you can be and I think that’s what I need.”

Coastal Carolina’s head coach is Jamey Chadwell, who is from Campbell County. He’s been in that position the past three seasons.

“I feel like I’ll have a chance to play early and that’s my goal,” said Bishop.

Marcus Hamilton, Karns running back coach, said: “I’m very happy for De’Sean. I’ve coached him since his freshman year. I’ve always told him ‘you go where you feel most comfortable and make sure you’re 100 percent sure.’”

Bishop has “dreams” of playing in the NFL someday. “That’s my ultimate goal.”

Hamilton said Bishop will get that chance at Coastal Carolina, a NCAA Division I FBS school.

“In doesn’t matter where you go to school,” said Hamilton. “If you’re good enough, the NFL will find you. There’s already plenty of proof of that in the NFL. De’Sean has tremendous talent and he has the ability. If he works hard enough and continues on the course, he could see that happening one day.”

He offered advice to others who are weighing their college choices: “Just enjoy it while you can.”

When asked about Tennessee, which had been recruiting him since last season, Bishop said he didn’t what to talk about that, but there was “no love lost.”