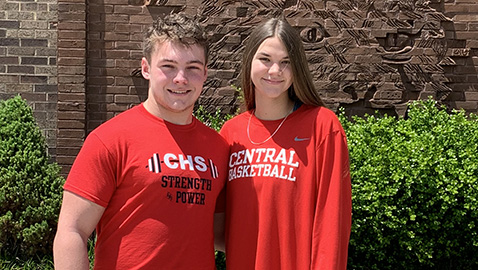 Student-Athletes of the Year Ashton Blair and Tyler Bost were a big part of unprecedented accomplishments for Central High before the COVID-19 coronavirus impact during the second semester resulted in an unprecedented school year.

Blair, a 6-3 goalkeeper, helped lead the Lady Bobcats to their first state tournament appearance in school history last fall, while Bost and the CHS football team were on its way to repeating as Class 5A state champions.

Both seniors excelled on the field and in the classroom plus gave their time to community efforts when conditions were safe.

Head soccer coach Bill Mize calls Ashton “the epitome of a student-athlete. She was a dream to coach and it’s an honor to know her as an athlete, student and person.”

Academically, Blair ranked in the top 10 percent of her graduating class and was a member of the National Honor Society.

In athletics, she was a varsity player in soccer and basketball all four years. Honors came her way in both sports, too.

In her senior year of soccer, Blair was the MVP in District 4-AA and Region 2-AA and made both the Tennessee Coaches’ and Tennessee Sports Writers Association’s All-State teams.

She was a volunteer in Special Olympics, assisting Central’s CDC students.

“I love working with these students,” Ashton said. “It’s one of my favorite things I have been able to do at Central.”

She also volunteered through AYSO to work with special need players.

Bost pretty much came out of the same mold as Ashton, as for his production in academics, athletics and community service.

The 6-foot, 225-pounder started every game his senior year, playing both ways as a linebacker and offensive left tackle and also was a captain as Coach Bryson Rosser’s Bobcats came on strong in the playoffs to capture their second state title in a row.

As for accolades, Tyler was a two-time All-Region 2-5A linebacker and All-State as a senior as he racked up 117 total tackles, 14 tackles for loss, four sacks, seven quarterback hurries and two forced fumbles.

Bost’s work in the offseason and weight room (squat 460 pounds, bench 325 and power clean 285) contributed to his success.

In academics, Tyler had a 3.8 weighted grade point average and 26 on the ACT. He ranked in the top 15 percent of his class. His classroom success comes from studying for tests, staying organized for classes and doing homework.

On top of that, Bost accumulated 300 hours of community service throughout his high school career.

Nick Craney worked closely with Bost as the team’s defensive coordinator before being elevated to head coach after the 2019 season and has been very impressed.

“Tyler is an incredible young man that exemplified what it means to be a Bobcat to the fullest,” said Craney. “He performed at an extremely high level not only on the field but in the classroom and in our community. He was the heartbeat of our team and his love for his football ‘family’ was one of the most significant reasons the Bobcats are back to back state champions.”

As for the future, Bost signed with Maryville College. Blair has committed to ETSU in soccer.