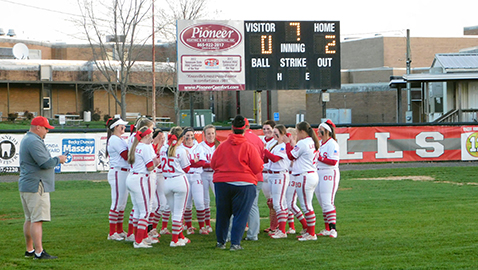 There’s no question who the Star of the Game was in Round 1 of this season’s Halls vs. Powell high school softball rivalry.

Halls senior pitcher Bri Blair took matters into her own hands, tossing a shutout and smacking a two-run homer to give the Lady Red Devils a 2-0 victory in the District 3-AAA battle last week at Halls.

The Lady Red Devils squeezed the most out of their offense, while the defending state champion Lady Panthers couldn’t buy a clutch hit and stranded nine base runners.

Halls improved to 6-0 overall despite getting only three hits off Powell hurler Allison Farr. The Lady Panthers, who had seven hits, dropped to 10-2.

When asked what she enjoyed the most – the homer or the shutout – a smiling Blair replied: “Probably both. It was my first home run ever. It’s just great. It just hyped us up even more.”

Blair, who is known more for her pitching and came back from an elbow injury last season, said the win over Powell was “really big and should give us a lot more confidence in ourselves.”

Powell Coach Jeff Inman said the lack of clutch hitting and disciplined at-bats was the difference in the game.

“It’s early. Hopefully, this will work to our advantage, because they needed to be brought back down.”

The defense helped Blair work out of a full blown jam in the second inning. Ashley Harbison led off with a single through the right side of the infield, Taylor Rodgers beat out a bunt and Emma Wright’s tough-to-field bunt in front of the plate loaded the bases with no outs.

Blair managed to get out of it. She fanned Reagan Radachesky on a high pitch third strike that was tipped but snagged by catcher Layna Gould. Madison McGinnis’ bunt was fielded by first baseman Aspen Calloway, who threw to Gould for the force out at home. That brought Powell leadoff batter Cayden Baker to the plate, but Blair struck her out on a 3-2 pitch.

Baker had opened the game with a base on balls and stole second. But she was stranded when Halls third baseman Bri McMillan fielded back-to-back grounders and fired to first for the second and third outs.

Powell also left a runner in scoring position in the third, fourth and fifth innings.

After Farr had retired 12 straight batters and was working on a perfect game, Halls struck in the fifth. Cassie Norris led off with a single and Gould’s sacrifice bunt moved her to second. After Lauren Lawson flew out to right, Blair delivered her game-winning home run on a 3-2 pitch.

Blair’s blast hit the top of the fence in left center but bounced on over.

With Powell’s top three batters up at the plate in the seventh, Blair retired the side in order for the first time to end the game.

“Just a gritty performance,” said Halls Coach Bryan Gordon of Blair’s pitching. “That’s what I’ve come to expect out of her. When it comes to a big game, she usually locks in for us. She gives us everything she’s got.”

As for Blair’s bat, Gordon admitted: “I wasn’t looking for a home run. I was looking for a double or just a base hit,” he laughed. “The home run was a little bit of a shock.”

It stunned the Lady Panthers, too.

Round 2 is scheduled for April 18 at Powell.

BACK HOME: With its field unplayable since the start of the season from damage done by floodwaters, Coach Inman said new dirt was scheduled to be going down March 27 and he was “hoping by the end of (this) week we’ll be on it.”