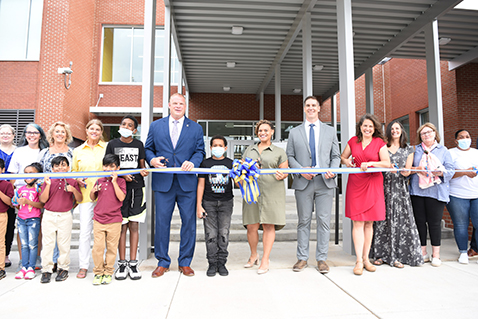 The Knox County Board of Education’s regular session meeting lasted less than an hour late Wednesday afternoon at the Summer Place as all items on the agenda passed with little or no discussion.

Following the 55-minute meeting, board members and those in attendance were invited to join a small going-away party for three members who were at their last voting session.

Virginia Babb, after serving four years on the school board opted not to seek re-election. Board members Patti Bounds (who served eight years) and Evetty Satterfield also did not seek another term.

The meeting, however, didn’t get off to a smooth start. Each board meeting is traditionally begun with a moment of silence and the Pledge of Allegiance.

When Daniel Watson, who led the pledge, asked those attending the meeting to face the flag, it wasn’t in its place.

The flag was, however, retrieved and the meeting continued and board chairperson Kristi Kristy exhibited her sense of humor.

“Virginia, Evetty and Patty, you won’t forget your last meeting,” she said. “Daniel told us to face the flag and the flag wasn’t there.”

Satterfield, who is leaving the board to pursue other business and leadership opportunities, did ask for a board forum to be added to the agenda.

Each board member said their goodbyes to those who are departing and Kristy thanked each of them for their leadership and service to Knox County Schools.

Babb and Bounds were a bit stoic in their final remarks.

“I am really going to miss the school board,” Babb said before leaving for the final time. “I’ve really enjoyed it.

“We’re all looking forward to seeing what Evetty is going to do, but Patti and I are going to do great things, too.”

Bounds, a former kindergarten teacher for KCS, said she was grateful for her time with Knox County Schools as both an educator and a board member.

“It’s been an honor and a pleasure to be with Knox County Schools both as a teacher and on the board,” she said.

In a prepared statement, Satterfield also expressed her gratitude to the voters in District 1 who elected her as a 29-year-old and a graduate of Austin-East Magnet High School. She was choked with emotion as she bid farewell to her fellow board members.

Board member Mike McMillan had some kind final words for the trio of departing board members.

“To the people who will no longer be with us, I’ve enjoyed the time we’ve spent together,” he said. “We haven’t always been on the same side. But I’ve enjoyed it and I wish you all the best.”

Kristy presented Bounds, Satterfield and Babb each with a plaque for their service to the board.