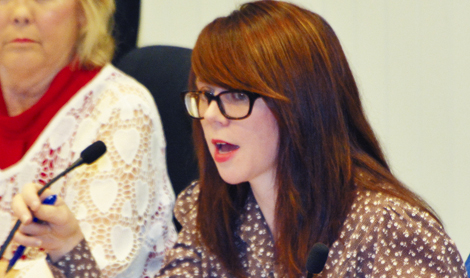 The early February Board of Education meetings last week got off to a rough start. Veteran BOE member Karen Carson was clearly irritated that newcomer Amber Rountree had requested two discussion items on the work session meeting agenda: amending the leave policy to include bereavement leave for both classified and certified employees; and a follow-up teacher survey.

Concerns about bereavement leave are legitimate; until the December 2014 Memorandum of Understanding (MOU) was signed, KCS employees did not receive bereavement leave. The MOU granted two days of leave for certified employees, but the KCS policies do not reflect this change. The discussion was postponed until next month so a policy could be drafted. The administration claims it will be retroactive to the date of the MOU.

It’s been just over a year since the extensive KCS teacher survey was conducted. Rountree asked why KCS was not doing another survey to compare with last year. She explained that teachers are surveyed every year in the online TELL survey from the state, but the response rate is low (42%) compared to the participation in last year’s paper survey (89%).

Some Board members and Dr. McIntyre cited concern about the time and man-power it would take to repeat the in-house survey. Gloria Deathridge asked why the response rate was so low for the online TELL survey.

This question resulted in a flurry of responses on the SPEAK Facebook page. In a nutshell, teachers don’t like to do online surveys that can be traced through their school email or IP address. They are far more comfortable with the paper/pencil survey, and appreciate the opportunity to add comments (last year’s in-house survey generated 163 pages of teacher comments).

Several teachers spoke on this topic in Public Forum. Lauren Hopson asked “Why, all of a sudden, is KCS concerned about the time and manpower spent for data collection? Many teachers in our system currently feel like they have been directed to spend as much time and manpower on data collection and analysis as they do on teaching…We want to know how our students have improved, don’t we want to know how our system has improved?”

She quoted Brenda Owensby, who said, “Having an employee complete a survey, and then not following through on their comments, is worse for morale than not doing the survey in the first place.”  Hopson asked, “If getting accurate data is so wonderful, what is the KCS administration afraid of?”

Mark Taylor called the administration out on the lack of communication about the TCAP writing assessment (also referred to as MIST), currently ongoing in Knox County. The Tennessee DOE website specifically says, “The 2015 TCAP Writing Assessment will continue to have no effect upon district or school level accountability including AMOs. The scores will not be factored into students’ grades, teacher value-added scores and should not be used for teacher evaluation purposes.” Taylor asked, “Please send a clear, concise message to all Knox County schools clarifying that the TCAP writing assessment does not count for a grade in any way.”

The board considered the first reading for two policies. Policy GBRIA, the Fitness for Duty Evaluation,” generated some discussion. “Employees may be required to undergo psychological evaluations, physical exams, and drug and/or alcohol screenings when situations or evidence indicate there is a need.”

Perhaps if the BOE had called it the Tina Needham Policy, everyone would have understood. But the policy was poorly written. Carson made a substitute motion to postpone discussion for one month, which was approved unanimously.

The board also discussed a proposal for drafting an educational adequacy complaint by the four-member Coalition of Large Area School Systems (CLASS). When the BEP (Basic Education Program) formula was revised in 2007, larger counties received less funding per student than smaller counties, based on the assumed “ability to produce revenue.” But “BEP 2.0” was never fully funded, and large and small counties alike are not receiving adequate funding in lieu of the many mandates coming from both the federal government and the state.

CLASS proposes drafting a compliant to allow CLASS members (and other smaller districts) to see how an inadequate funding lawsuit could be pursued in court. The board (with the exception of Chairman McMillan) agreed there was a “need to gather data and information to determine adequacy in funding to be used in the development of a complaint, but were opposed to using Hogan Lovells, a high-priced law firm based in Washington DC, to prepare the complaint. Carson offered a second motion suggesting that “CLASS explore potential for this work to be done by a Tennessee law firm,” which passed unanimously.

Dr. McIntyre announced in his Superintendent’s Report that KCS received a letter of intent to submit a Charter School application from Genesis Rock to open a “Dream Academy” charter in Knox County. The school would ultimately serve up to 620 students in grades 6 through 12.

This is the third attempt by the nonprofit Genesis Rock to open a charter school in Knox County. In 2012 they filed an application to convert Vine Middle Magnet into a charter, and the following year, they proposed opening the Dream Academy New Tech School in northwest Knoxville. Both previous applications were voted down by the Board.

It will be interesting to see what, if anything, changes in the application from last year. Several of the new BOE members have been outspoken in their opposition to funneling public dollars into privately managed charter schools.