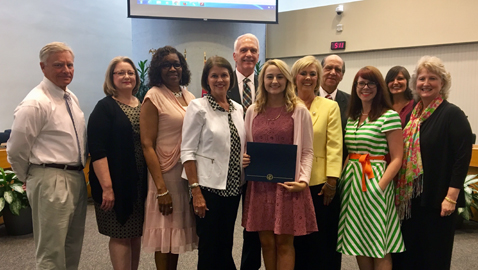 At a rather lengthy Knox County Board of Education meeting last Wednesday, board members, other government officials, interested citizens and parents expressed their opinions on discipline policies, the proposed Lonsdale youth recreation facility, school rezoning and transgender issues.

“I am afraid the policy will start to erode the discretion of the principal and the classroom teacher,” was the opinion of Tony Norman. He felt that more input was needed from teachers and principals.

“We don’t need to rush into anything until we are sure we are doing something beneficial,” stated Mike McMillan.

Gloria Deathridge was the only board member to vote against delaying the first reading for 30 days in order to get input from principals and teachers.

There was also lengthy discussion about surplussing school operated property that is owned by the county. The property is to be used for the proposed youth recreation facility in Lonsdale.

“All we are doing is surplussing a lot because the county asked us to do it,” asserted Lynne Fugate. “This resolution further states that if nothing happens the property is transferred back to school.”

“Communication from people in that area has been very opposed,” stated Jennifer Owen. “People who are much further away have been not only very supportive but almost aggressively supportive. That alone for me is reason to pause and take a look at things.” She expressed concern that the property would go to a non-public entity and the city and county would have no control over it.

Owen went on to state that the property could possibly be used for a magnet school. Several other board members said they had not heard anything about a magnet school at that site.

“The city has reached out,” asserted David Brass, the city’s director of public works. “We are very open about this project. There is no hidden agenda. We are reaching out to youth. “He said the next step after the board surplussed the property would be for the city and county to enter an agreement with Emerald. Brass said the city needs to move forward on the project but they will need to consolidate the property and have control over the entire parcel. “Is there urgency? Yes,” he said.

Interested citizen Rick Roach urged the board to take no action until they received further input from the community. He said the surplus would be the continuation of a trend to abandon inner school property.

Another speaker had the opposite opinion. “I challenge you to make this move right now,” urged Pastor Joe Smith whose church is near the proposed project. “This will be a great asset for the community.”

A vote to delay the decision for 30 days was defeated with only Norman and Owen voting for the delay. The motion to surplus the property passed by a 7 to 1 vote. Owen cast the only negative vote. McMillian was not present for the vote.

With no comment the board voted unanimously to approve rezoning to accommodate the two middle schools under construction.

“This is a step in the right direction,” said Deborah Porter, president of the local chapter of the NAACP. She said her organization wants the rezoning process to continue and more schools to be built.

Parents, students and others who oppose the school system’s policy on transgender students turned out in even larger numbers than last month’s meeting to support their cause. About 15 people gave emotional statements, often to the accompaniment of applause.

One parent said her transgender daughter does not feel safe or loved at school. She was required to use either the boys’ or the staff bathroom.

Another speaker compared the present system with the “separate but equal” argument used at one time to justify integration in the South. The speaker also claimed the physical and emotional health of transgender students is deteriorating. “All you need to do is reach out to us,” the speaker pleaded.

Not allowing transgender students to use the bathroom of their choice goes against the zero tolerance against bullying, one speaker said, urging the board, “Be on the right side of history.”

“No one should have to hide who they are,” a speaker asserted, urging that every teacher and every coach be educated on transgender issues.

“We are telling our students there is something unacceptable about them,” was the opinion of one speaker.

“This is not about catering to a few kids. This is about saving lives,” was the opinion of still another speaker.