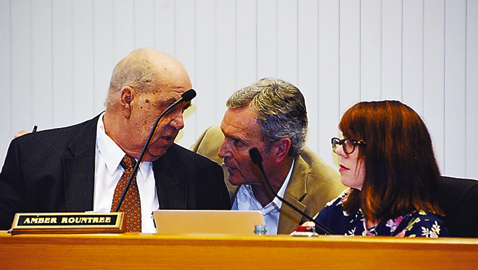 The main focus of last week’s Board of Education meetings was the approval of a contract for incoming Interim Superintendent, Buzz Thomas, with a proposed salary of $195,000.

Thomas will be starting in his role as Interim Superintendent on June 15, allowing several weeks of transition with outgoing Superintendent Dr. Jim McIntyre, who is resigning effective July 8. McIntyre described this time by saying, “The analogy we’ve been using is at that point in the transition, I would sort of be the licensed flight instructor in the co-pilot seat, and Buzz would be flying the plane.”

Amber Rountree asked about the benefits package, specifically what benefits were included in the $3,350/month package. Mr. Dupler of the Law Department confirmed this included health and life insurance, disability, and retirement, but added the law department advised against specifically listing the benefits in the contract.

McMillan said, “That’s not too far from what the director gets now.” Harris confirmed the total with benefits for McIntyre is about $270,000.  McMillan replied, “well when you get close to a quarter of a million dollars, what is $15,000 one way or another, Mr. Harris. I mean really. I’m talking about how this appears to the public out here.” McMillan said he thought $235,000 was “too much for an interim position.”

Gloria Deathridge also asked about benefits, reminding the Board that when they went through the process recently in renewing the superintendent’s contract, the law director said the benefits needed to be the same as or similar with the teachers’ benefits. She asked if the benefits in Thomas’ contract were the same as the teachers’.

Dupler explained, “Benefits are not just based on the dollar amount, but on what is available based on salary and several other factors. With regard to the affordable care act, the Director or a high level executive cannot have benefits that are completely different.”

During this discussion, Thomas came to the front of the assembly room and engaged in a brief conversation with McMillan.

Lynn Fugate called him out on it: “Mr. Thomas, would you please share with all of us the side bar conversation you had with Mr. McMillan?… I hate to put you on the spot but in the interest of transparency if you would share with us that conversation I would appreciate it.”

Thomas cordially agreed, thanking the Board for the opportunity to do that and thanking McMillan for his candor.

He said the discussion with McMillan was about his salary. He explained that the salary determination was based on his current GSP salary of $183,000 per year plus an average $12,000 performance-based-bonus. But, he said, this is still $32,000 less than the current superintendent’s salary. His benefit package is also less, as he did not accept the $700/month car allowance. He said the intent of the proposed salary was to pay him roughly the same salary he makes now at GSP.

Fugate said she felt comfortable with $195,000, pointing out that KCS is the 75th largest school system in the U.S., and that the person in charge is responsible for more students and more facilities than any college president in the state, and they make a lot more money.

Karen Carson took the opportunity to rebuke Thomas, saying, “Buzz, I appreciate you coming up and sharing that… but I frankly was appalled to see you, during a vote, go up and speak to an individual, and I know you know, but what will be glaringly obvious to you, is that you are under a microscope in this job the entire time.”

Regarding benefits, Carson said, “When we were attempting to renew the Superintendent’s contract, the big sticking point, what made it legal to form or not, related to benefits and the wording ‘upon same terms and conditions as other employees of Knox County Schools.’ The fact that we are going away from that just seems like we are trying to hide something.”

Harris said, “The reason for that is because we don’t know how long the interim job is going to be in place… It makes it easier for him to make this transition from this job back to his other job.”

McMillan once more made the case for the person in his district, who says, “I’m making $30,000, this guys is making seven times what I make, yet I pay my taxes to pay his salary.”

No amendments were offered. A roll call vote was held, and the contract passed 9 to 0.