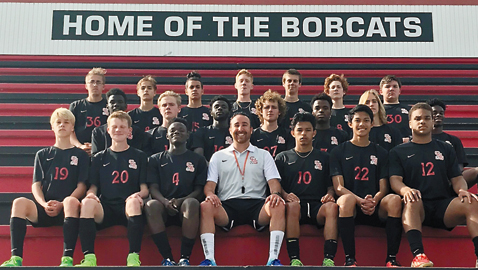 Central High School’s boys soccer team is quickly establishing itself as a competitor in East Tennessee.

And new head coach Chris Quinn has stiffened the Bobcats’ schedule in 2017 and Central has responded by going toe-to-toe with the Volunteer State’s elite powerhouse teams.

Central recently competed in the Bearden Invitational, the top high school tournament in Knoxville, and the ‘Cats held their own against teams like Gallatin, Christian Academy of Knoxville, Morristown West and Notre Dame.

The Bobcats closed out tournament play with a 3-2 victory over the Chattanooga’s Irish on Sunday, April, 2 at Bruce Allender Field.

“We beat Notre Dame 3-2 and that was a big win for our program,” Quinn said. “I wanted to compete in this tournament and I wanted to show our players that we could compete against these teams.”

Well, the Bobcats (4-2-1 overall, 3-0 in District 3-AAA) certainly got a glimpse of just how competitive they can be. Kalulu Bamba had a hat trick against the Irish in Central’s Bearden Invitational finale.

In the narrow loss to the Trojans Saturday afternoon, Josh Gibson’s scored the lone goal of the match for the Bobcats, who were suffering from fatigue after pulling off the draw against the Warriors earlier in the day.

“Against Morristown West, we were tired,” Quinn said. “After we tied CAK, we didn’t get the chance to reflect and our guys didn’t get to go home and think about it.

“They didn’t get the chance to enjoy it.”

It was a history making draw for the Bobcats, who salvaged a tie thanks to a pair of late markers by Bamba and overcame a 2-0 deficit to the defending Class A/AA State Champions.

Central dropped a 2-1 decision to Gallatin despite a late goal from Eli Holbert, who signed to play football at Carson-Newman just hours before he and his teammates notched another key District 3-AAA match.

After four tough matches at Bearden, the Bobcats were idle until Thursday night. But they returned to the pitch and promptly knocked off Black Oak Ridge Rival Halls 4-1 at Dan Y. Boring Stadium.

Bamba and Michael Duarte each scored a pair of markers against the Red Devils, who notched league wins over Powell and Gibbs earlier this season.

For now, Central may be the best-kept secret in Knoxville’s high school soccer circuit, but that all may be about to change.

“We have talent on our team,” Quinn said. “It’s there.

“We don’t play the same style as Bearden or Farragut. We can’t play the way they do. But we play a high-tempo offense. We play in a tough district. It’s not District 4, but it’s tough.”

For several years, Oak Ridge has dominated District 3-AAA. Central, Karns, Powell, Halls and Gibbs have all had sporadic success but the Wildcats, it seems always win the district regular-season or tournament and wind up playing in the Region 2-AAA Tournament.

Oak Ridge appears to always handle its district slate with little difficulty. But the Bobcats certainly won’t fear the Wildcats in 2017.

Quinn, who previously served as an assistant at West High School, stresses hard work, but he also wants his players to have fun.

“I work them hard but they’re having fun,” he said. “We are a brotherhood. We’re all brothers on the field.”

Central will return to action Tuesday when it entertains Karns in a district match at home.

Kickoff is slated for 7 p.m. The Bobcats will then entertain West in a non-league game Thursday night.