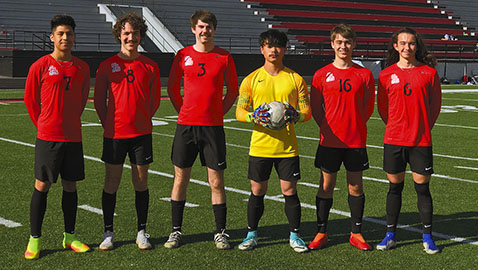 When the Central High School boys soccer team opens its season today at Seymour, it will mark the first time that the Bobcats have been on the pitch for a match since March 12, 2020.

“It was a cloudy day and we were getting ready to play Seymour and I was with two of my players and we were putting our sponsors’ banners on the fence,” Quinn said. “The world seemed to be changing all around us.”

The Bobcats went on to play the Eagles. But it was more than just a game for Central, which took the opportunity to collect relief supplies to donate to the victims of Middle Tennessee tornado victims. The Bobcats were one of several local teams, including Bearden, Hardin Valley Academy, Farragut and Catholic, to donate to tornado victims in Nashville and Cookeville as the storms ripped through the Midstate just days before.

The Bobcats had their fans donate supplies in lieu of admission to what would be Central’s only match of the season.

“My family and I drove the supplies down there and that was (the fans’) admission,” Quinn said.

Central and the Eagles will open the season tonight in Seymour at 6 p.m. and the Bobcats will be hungry to open the season after more than a full calendar year away from the field.

Quinn has some pretty lofty goals for his side this season, but he said that neither he nor his Bobcats will look to far ahead.

“We’re going to take things one day at a time and one game at a time,” he said. “We’re going to play each game like it’s going to be our last, because last year showed all of us that it very well could be.

The Bobcats have a talented and experience nucleus back and most of the team’s upper classmen have played together since they were at Gresham Middle School.

After playing Seymour, the Bobcats will make their fifth consecutive trip to the Bearden Invitational.

Central is slated to play Maryville Thursday at 6 p.m. The Bobcats will take on Oak Ridge Friday at 8:30 p.m. on Friday. Central will tangle with tournament host and defending Class AAA State Champion Bearden on Saturday at 6:30 p.m.