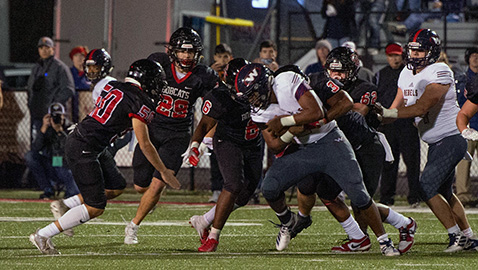 Central is the one still standing.

In a knockdown, drag out football slobber knocker worthy to be played on Joel Helton Field, the Bobcats walked away with a 10-0 victory over the West Rebels in the TSSAA Class 5A semifinals Friday night.

It was the last battle of Knoxville’s own Final Four. Central, Powell, South-Doyle and West all had state title hopes coming into the playoffs this season. After two weeks and three do-or-die contests between them, the team wearing Red and Black was left standing at Dan Y. Boring Stadium.

“Yeah, it was very physical,” said Central middle linebacker Tyler Bost, who had his jersey ripped off by a West offensive lineman and had to wear a different jersey for the remainder of the game. “Both of us wanted it really badly. Ultimately, it just came down to who wanted it more, and whoever wanted to push harder and fight for extra yards at the end of it.”

Now it’s on to a bigger stage. The Bobcats have one fight remaining to claim a second straight state championship. Summit High, wearing Navy Blue and Orange, will be in the other corner. The bell rings Friday night at 7 (CST) at Tennessee Tech in Cookeville.

Both teams are 12-2 coming into the matchup, but whether or not the Spartans from Spring Hill are as tough as any of Knoxville’s Final Four is questionable. The Bobcats will be ready and hungry no matter what.

“We’re very hungry,” said Bost. “We’ve been working all year for this. Every team wants it so bad. It’s what we worked all year for. We’ve dreamt to come back every since we won the last one.”

In some ratings, West was a 3-point favorite over Coach Bryson Rosser’s Bobcats coming in. The 12-1 Rebels’ only loss had been a one-point overtime defeat at the hands of Powell in the regular season and they avenged that with a 17-point victory over the Panthers in their quarterfinal rematch in the Jungle.

The Bobcat also had avenged one of their losses with a 20-16 win at South-Doyle in the quarterfinals, coming back from a 10-0 deficit.

The semifinal meeting between the two seemed to get more physical as the game went on.

Biggest plays in a scoreless first quarter were a sack and fumble recovery by West’s Andrew Gilbert and a blindside sack by Central’s Kalib Fortner. Both hits stopped offensive threats – Central at the West 27-yard line and West at the Central 32.

Jason Merritts scored on an 8-yard run up the gut to account for the game’s only touchdown with 8:47 showing on the second quarter clock. Liam Fortner’s 27-yard catch from Dakota Fawver on the preceding play set up the score. Jared Swislosky kicked the PAT.

West responded with a march – all on the ground – to the Central 23. Isaiah Mattress ignited the drive with an 11-yard gain. Freshman Jai Hundley broke a tackle and went 19 yards to the 23.

But Bost dropped Mattress for a 2-yard loss on the next play and Baker Dance’s second down play action pass fell incomplete. Kalib Fortner and Bost held Mattress to a 1-yard gain on third down. Hudson Schmid’s 41-yard field goal attempt was short and wide right.

The Rebels threatened again before halftime. After getting good field position at the Central 46, Mattress broke a tackle at the line of scrimmage and picked up 12 yards. Omarian Wright added a 15-yard gain on a reverse to the 17.

But Central again stopped the Rebels in the red zone. Hundley was stopped for no gain on first down. Dance’s second down pass fell incomplete in the end zone. Kalib Fortner chased down Mattress from behind on third down just a yard past the line. This time, after Central called back-to-back timeouts to ice the kicker, Tyson Siebe missed a 33-yard field goal attempt with 46 seconds to go in the half.

Two big offensive plays – a 36-yard catch and a 12-yard run by Braden Gaston – put Central in the red zone late in the third quarter, but an errant snap resulted in a 23-yard field goal attempt being no good.

The first play of the final quarter saw Kalib Fortner continue his outstanding play by intercepting a pass and returning it 18 yards to the West 24. That led to Swislosky’s 37-yard field goal that gave Central a two-score lead with 10:23 remaining.

Adams also had a 7-yard sack on the Rebels’ next series, but Dance overcame it with a 26-yard completion to Drew Francis and a 27-yard screen pass to Mattress for a first down at the Central 33.

Dance kept the drive alive with a 20-yard pass to Wright on a do-or-die fourth-and-10. But Dance’s next four passes fell incomplete. Central took over with only 2:48 to go and ran out the clock.

“My hat’s off to Central,” said West Head Coach Lamar Brown. “I wish them the best of luck. Coach Rosser and his staff do a great job and they have a great football team.

“We couldn’t get any kind of rhythm at all offensively. We had some drives inside the 20, missed two field goals and just couldn’t put anything together back to back to get it in the end zone. We always found ourselves in a hole it seemed like.

“I’m real proud of these seniors and this football team. They are a great group of young men. They gave this football program everything they had this year and got us back to where we should be and laid a great foundation for the future.”

TV COVERAGE: Central’s Class 5A state championship game will be televised locally on MyVLT, as well as all the BlueCross Bowl state title games.