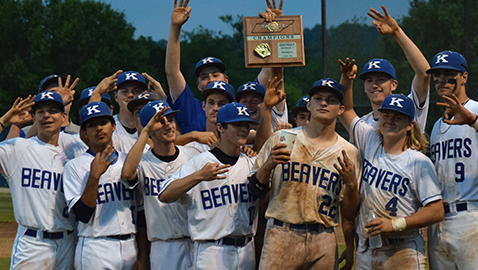 With southpaw starter Jared Culp allowing only one hit through six innings, Karns High’s baseball team just needed a little offense of its own in the championship game of the District 3-AAA tournament last Wednesday night.

But the Beavers were running out of time at Dwight Smith Field.

Visiting Powell scored two runs in the top of the first inning and sophomore right-hander Walker Trusley had protected the lead all the way to the sixth.

It took the bottom of the batting order to pull Karns through for a 4-2 victory, giving the Beavers’ the district tourney crown for the third year in a row.

No. 8 batter Zach Knott’s bases-loaded walk with two outs in the bottom of the sixth tied the game and No. 9 batter Brian Bell’s two-run single to right put Karns ahead.

Closer Ryder Green struck out two in the seventh, leaving Powell with runners at second and third as the game ended.

The winners will play for the region title Wednesday and earn an automatic berth in the state sectional round.

Bell couldn’t have followed his coach’s instructions any better in Karns’ comeback inning.

Bell was asked if he had ever had a bigger one.

“He’s just been nails for us all season. He’s been the rock in our infield at shortstop. For him to come up and get that big hit right there, that’s really impressive.”

Powell started fast. Courtney Payne led off the game with a walk and Matt Grim’s triple to left center brought him home. After one out, Logan Sutton’s sacrifice fly to right plated Grim for the 2-0 lead.

Karns didn’t get its first hit until two were out in the fifth. Knott singled to shallow center and was able to advance to second when the ball got by the centerfielder. Bell’s high chopper between third and shortstop moved Knott to third. Trusley, however, ended the threat when he got Jonathan Nelson to hit a grounder to third.

Following a walk by Green, Tyler Hartless’ double past a diving Powell shortstop plated Karns’ first run in the sixth. The Beavers went on to load the bases, but        Trusley got Aaron Tye to look at a strike three. Then Nick Miles’ bunt went straight up in the air and landed in Trusley’s glove for out No. 2.

All of a sudden, it looked like Powell might go into the last inning still on top.

But the very bottom of the Beavers’ batting order came through in the clutch. Knott worked the count to 3-2 and didn’t bite on a curve that was a tad high. Bell’s opposite-field hit landed softly in the green grass, allowing Karns fans to exhale a sigh of relief.

“I never get worried with this bunch,” said Coach Hurley. “They’ve battled all year. We’ve been behind before this season and they continue to battle back. They continue to impress me each and every game.

“What they show is heart, intensity and a blue collar work ethic that we preach around here.”

“They came out here and battled in a ball park that’s hard to play in,” he said. “And I’ve got to tip my hat to Trusley. To compete the way he did as a sophomore is impressive. He held a potent lineup down for almost five innings.”

First-year Powell skipper Logan Dalton took consolation in having another day to play.

“When you play close games like this, good teams find a way,” he said. “We’ve been able to find a way all year, but tonight it was Karns.

“We know it’s going to be a tough matchup, but we fully expect to go over there (to Farragut) and compete and get past that round.”