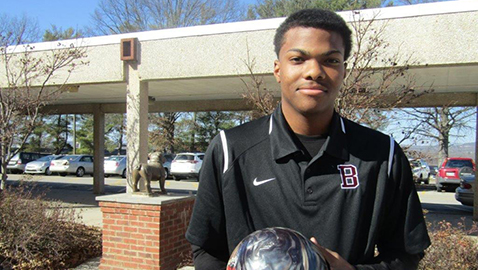 Michael Hines joined the Bearden High bowling team this past fall after the season had begun, but there was a reason why.

Hines was living in Cleveland, Tenn., and going to Cleveland High School when his mother died Sept. 22.

His older brothers became his guardians and he moved in with Jacob, who was working in Knoxville and going to Pellissippi State Community College, about a week after his mom passed away.

“That realization, however, did not counter the pain her death left me,” said Hines, who also had lost dad at age 6 and his granddad at age 8.

Knowing Michael’s passion for bowling, his brothers found a school with a bowling team for him to attend.

Hines quickly looked up Coach Jennifer Allen when he got to Bearden.

Unaware of the circumstances, Allen initially thought this was just a student who wanted to sign up after the deadline. But she soon got the facts and her and others welcomed Michael with open arms.

When this reporter learned of Hines’ life-changing experiences, the 16-year-old junior was asked if bowling on the Bearden team had helped him in dealing with the loss of his mom, and if so, how and in what ways?

“I don’t consider the Bearden High School team as a school that has helped me in that way because it would mean it’s merely a distraction,” answered Michael. “Allow me to clarify; the only things that would ‘help me’ deal with my loss are distractions. Most, pointless and repetitive. Some, worthwhile. Ultimately, nothing actually helps me deal with her death. Honestly I just go on for the sake of going on.

“Mile after mile on a treadmill. I’m going about my day because I have to. It’s for the best for those who actually know me that I keep going. This mixed in with activities that null my memory of her death is the perfect combination to get me through high school and college.”

Bowling on the Bearden High team was a ‘worthwhile’ distraction.

“Definitely,” said Michael. “Distractions that I figure are worthwhile are entertaining and beneficial, that actually help me in some sort of way. Not think about the loss.

“Making connections with friends, getting to know new people, getting a little better at bowling, having this new experience kind of changed this little outlook I’ve had.”

Hines started bowling at age 5 and regularly participated in youth leagues in Cleveland. He kept getting better and better and said he actually bowled a perfect game in his last league in Cleveland.

Hines rolled games of 178, 209 and 198 as Bearden placed second in the District 4 tournament this season.

Like many bowlers in the Region 2 tourney, Hines and his teammates weren’t prepared for the “oil pattern” on the lanes they faced at Pigeon Forge and saw their season end short of the sectionals.

“Next year, since we know how it’s going to be, I think we’ll be more prepared,” said Michael. “I really think we could win the region tournament.”

Coach Allen recalled wanting to run over and give Michael a hug when she saw him so disappointed at the region.

“Michael is a very conscientious young man,” said Allen. “He never asks for anything. We have taken him in and several of the parents have helped with rides to games and practices. One of the parents helped him get new bowling shoes and I have a friend who wants to donate a new ball. He is a good student and respected and liked by his teachers.

“Michael loves bowling and makes it a priority,” Allen added. “His last school did not have a team and he seems thrilled to be on our team. I think it allowed him to make new friends who have the same interest.

“In the beginning, he was very quiet, but now he’s much more open and you can tell he is really having a good time with his teammates. The team is made up of a great group of students.

“Michael has a beautiful swing. He has really helped the team, bowled over 200 many games and has won the majority of his matches.”

Hines expressed his appreciation last week to everyone who has helped him.

“They’ve really helped a bunch,” he said. “I don’t think I could have done as well without them. New bowling shoes, the transportation, a new ball that I’ll be receiving. I really do appreciate what they do.”

Although he is looking forward to the new ball, Hines said he will keep “Smoking Inferno,” too. “My old coach’s ball (in Cleveland) that he gave to me. Lot of sentimental value.”